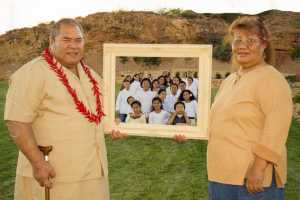 Sapati grew up in the beautiful village of Saafatoa Lefaga where he was taught important life skills including fishing, plantation, and underground cooking. His favorite childhood past time was playing marbles. His first job was for Starkist in American Samoa. Shortly after he moved to California and worked as a maintenance worker at Loma Linda Hospital for 9 years. Other jobs were Chef, Welder at Alliance for 13 years, and Coolant repairer for 2 years before he took an early retirement. He was baptized in The Church of Jesus Christ of Latter Day Saints in the Islands. He was a faithful servant and held several callings such as First Counselor in the Inland Empire Samoan Ward. Sunday School class president in the Bloomington 9th Samoan Ward. His best work & legacy was in his home. Although his home was always full of his own children, He always made room for one more.

Funeral services for family will be Tuesday Dec 3, 2019 at 5pm in St. George, Utah. Friends and family may call Wednesday Nov 27, 2019 for a viewing from 9-10:45 with funeral services at 11 am.  All services are at The Church of Jesus Christ of Latter Day Saints located at 3519 Manzanita Road, St George. Interment will take place in the Tonaquint Cemetery at 1777  South Dixie Drive, St George, Utah.

To send flowers to the family or plant a tree in memory of Sapati Tevaga Ta'afuli, please visit our floral store.