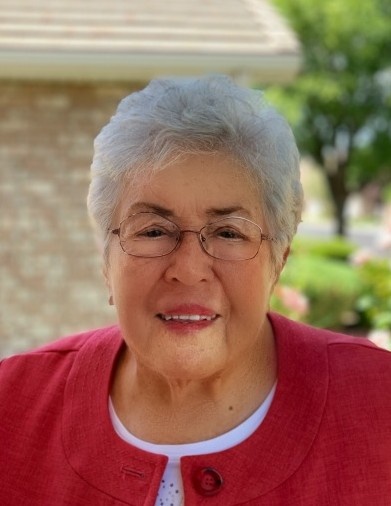 Anita Rae Hulet passed away on September 30, 2021, at the age of 90 years old. She was blessed with a long, wonderful life filled with a strong testimony of the gospel of Jesus Christ.

Anita was born in St George, Utah, on August 30, 1931, the first of five children to Leonard and Daisy Ina Leavitt Reber. Anita first lived in Rox, Nevada, a small railroad town where her father taught school. They moved to Mesquite, Nevada, where her father was fortunate to get a teaching job.

Anita attended Virgin Valley High School. She served as the Student Body President, was a member of the yearbook staff, and participated in operettas and the band. She received a scholarship to Dixie College and attended for two years. She was awarded an Associate Degree in 1951.

Anita was foremost a wife and mother. She married Norman Lee Hulet in the St. George Utah Temple on November 3, 1951. They raised their five children in New Castle, Utah. Anita worked for Dixie Escalante Electric for 24 years as a bookkeeper and helped provide for missions and college educations for her children.

In 1995 Norman and Anita started to share their time between New Castle and St. George. Anita cared for Norman in his battle with ALS.

She loved working in her yards and gardens and had beautiful roses, flowers, and vegetable gardens. She enjoyed music, served many years as the choir director for the New Castle LDS Ward, and sang in General Conference with Singing Mothers in 1968. Anita began painting after her husband’s death, and her family all benefited from her beautiful works of art.

Anita is preceded in death by her parents, Leonard and Daisy Reber, sisters: Gwen (Lee) Homer, Ina (Woodrow) Wagner, and her husband, Norman. She leaves behind a legacy of love, hard work, and an undying commitment to her family and God.

To send flowers to the family in memory of Anita Hulet, please visit our flower store.
Send a Sympathy Card