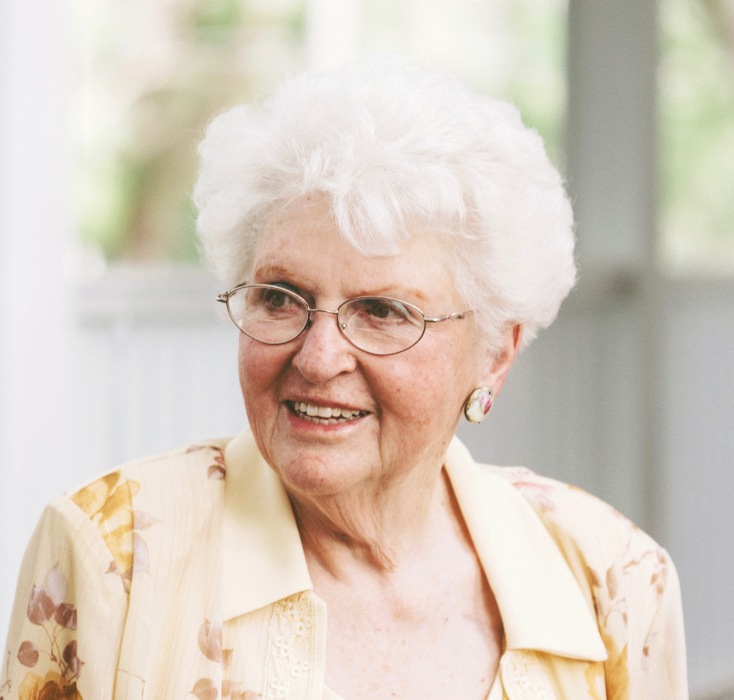 Betty grew up in California, graduated from Monrovia-Arcadia-Duarte Union High School, and was a two-year graduate from Pasadena Junior College.  She majored in secretarial work and in dress making and designing. She used her secretarial know-how working for her family’s business.

When the love of her life, Stanley Oliver, returned from his service in the U.S. Army in World War II, they were married - several times.  The first time was in Michigan on March 11, 1954 with Stan’s family in attendance, then three weeks later on March 28, 1945 in California, with Betty’s family and friends around them.  The third time was on March 26, 1955, when they were sealed with their four sons for time and all eternity in the Saint George Temple.  They had joined the Church of Jesus Christ of Latter-day Saints the year before. Two daughters were born a few years later.  The family lived in Compton, California for 25 years.  In 1971, Betty and Stan moved to Gunnison, Utah, where Stan continued his work as a builder and a cabinetmaker.  Betty was the plan designer for the business. She also designed and drew the plans for their two homes.  She loved to draw house plans and did so for over 72 years.

After building their home in Gunnison, Betty discovered the joy of yardwork.  She moved pipes and hoses and wheel lines to water 10 acres of alfalfa until she was 85 years old.  There were lawns to be mowed, and weeding--never-ending weeding--but she enjoyed the care she gave to their yard and home.  She made quilts for her children, grandchildren, and great-grandchildren. Betty’s husband, sons, and daughters, and their families were the “exceedingly great joy” of her life! Betty & Stan had 6 children, 16 grandchildren, and 21 great-grandchildren. In addition, she ‘adopted’ into her family several others whom she considered and loved as her children and grandchildren.

She enjoyed her membership in The Church of Jesus Christ of Latter-day Saints. Betty served in Primary and Relief Society, in both teaching and leadership positions. Music was very important to her -- especially singing. She was a choir director and chorister for her Ward, and chorister for the Gunnison Utah Stake - callings she held for many years! Betty was also a volunteer for Gunnison Valley Hospital, and at the Middle School, where she assisted students with their reading. Her love of people was never-ending.  She had many friends. She loved life!

Susan (Roger) Taylor. She was preceded in death by a daughter, Kathryn Oliver, husband, Stanley, her parents, her brother, Richard (Dick) Stegner, and 2 grandchildren. Betty had a long and fruitful life! She enjoyed the challenges she had—always with a prayer and a smile. And the smiles continue as she now enjoys a long-awaited, grand reunion with loved ones.

Her funeral service will be held on Saturday, October 27, 2018 at 11a.m. at the Gunnison Stake Center of The Church of Jesus Christ of Latter-day Saints, 80 W Center St, Gunnison, Utah.  The viewing will be held prior to service from

9-10:30 a.m. at the same location. Interment will be in the Gunnison City Cemetery following the funeral service.

Funeral services have been arranged by Hughes Mortuary of St. George.

Thank you to all who cared for Betty in the final weeks of her life. The care she received from the Nurses and staff from Community Nursing Services was excellent and compassionate. She will definitely be giving you hugs sometime in the future.

To send flowers to the family in memory of Betty Jane Oliver, please visit our flower store.
Send a Sympathy Card