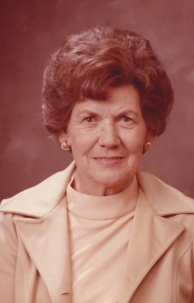 Hurricane, Utah- Beulah Thomson Curtis died April 12, 2016 from causes incident to age. She was born June 1, 1918 in Pocatello, Idaho the oldest child of Jesse West Thomson and Effie Emelia Erickson. Her parents, two sisters, a brother and a son preceded her in death. She was also preceded in death by her husband, Cloyd Thomas Curtis.

Beulah and Cloyd met at a roller skating rink and were eventually married on July 15, 1939. Later sealed in the Logan Temple.

When Beulah was just 6 years old her father was called to serve a mission in the British Isles. This left Beulah, her mother, younger brother and a newborn sister to make the sacrifices necessary for the years he was gone. The gospel and her family were always Beulah's top priorities.  She was well read and had a rather large library where most of the books had copious notes and cross references.  Beulah was always involved in the church and held many leadership positions in the Primary and Relief Society. She later served a mission to Florida with her husband.

Beulah was always artistically inclined and became quite an accomplished artist.  Her paintings won many ribbons at state and county fairs . She would accompany her husband and his many fishing trips with her easel in tow.  She would paint while he caught fish.

Beulah is survived by three of her four sons, Gary (Arlene), Dennis (Judy), and Raymond. Her son Dale (Nancie) preceded her in death.

Funeral Services will be held in the Heritage LDS Chapel located at 1178 South 700 West, Hurricane , Utah on Saturday April 16 at 11:00 am.  A viewing will be held prior to the services from 9:30-10:30 am. Interment will be at the Hurricane City Cemetery.

To send flowers to the family in memory of Beulah Thomson Curtis, please visit our flower store.
Send a Sympathy Card