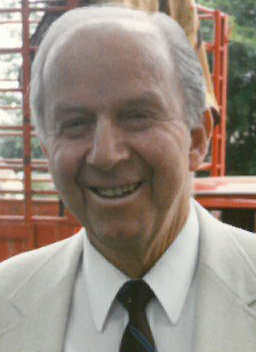 Cecil Blake was born on April 23, 1917 to Benjamin Blake and Rosena Eliza Blickenstorfer Gubler in the Blake Home on 100 East in St. George, Utah.  He was a sickly baby and three days after his birth he was quickly given a blessing and the short name of Cecil Blake as he was not expected to live.  Just a short 99 years and one week later Cecil passed away at home in St. George in the early morning of April 30, 2016 after a beautiful night of rain.  No one appreciated the rain in this dry country  more than him.

He grew up in St. George working hard and helping to provide for his family from an early age as his father passed away when he was just 16.  He purchased his first truck from money earned by hauling wood from the Arizona Strip with a team of horses and a wagon. He spent many summers at the Blake and Gubler Ranch on the south side of Pine Valley Mountain and told many stories of the deer camp where he helped his half- brother Archie Gubler.

Cecil served a mission for the LDS church in the Northern States Mission in 1936-38 in the days of “no purse or script” and loved his experience serving and teaching the Gospel.

He married Virginia May Latimer on July 12, 1939 and they had 6 children.  Sadly Virginia passed away from complication of child birth in 1949.  He married Carol Dean Dec. 1, 1950 and she was a wonderful help in raising his five children with the baby being raised by his sister Hazel.  Carol passed away on April 4, 1975.

In September of 1975 with his own children grown, he married a young widow, Ila May Bundy Hughes who had 10 children of her own.   They have been married for 40 years.  They served a mission together in 1990 in the Philippines.

Cecil taught all his children to work hard on the farm and ranch.  He was a rancher on the Arizona Strip and a farmer in the Green Valley area and continued to work well into his 80’s.  In his later years he enjoyed doing Temple work and attended often. He served in many callings in the LDS Church and this was a very important part of his life.

Funeral services will be held on Thursday May 5, 2016 at the LDS East Stake Center across from the Temple at 11:00 am with a viewing prior to services from 9:30 to 10:45.  There will be a visitation on Wednesday, May 4, 2016 from 6-7:30 pm at Hughes Mortuary, 1037 East 700 South, St. George, Utah.  Please visit www.hughesmortuary.com for complete funeral listings and to leave condolences.

To send flowers to the family in memory of Cecil Blake, please visit our flower store.
Send a Sympathy Card