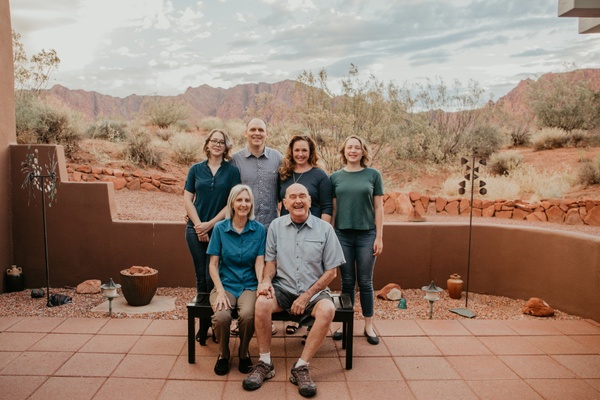 I deeply regret to announce the passing of Charlie Peterson in Ivins, Utah the evening of Monday, August 17, 2020 after a courageous battle with an aggressive brain cancer.

Charlie’s life was full of adventure. He loved the outdoors, creating, and most of all helping people. He was not afraid to try new things – scuba diving, caving, kayaking, building furniture, making pottery, weaving a Navajo rug, rowing the Colorado River, and backpacking. He had a great curiosity about the world and was never afraid of a little hard work. He believed very strongly that he could accomplish hard tasks by staying focused, setting goals, digging deep down and channeling inner strength.  He wanted everyone to succeed in their pursuits and was willing to help others without taking any credit.

He grew up in East Texas with his parents, Harmon and Mary, and his two brothers, Tommy and Jimmy. After graduating from college with a degree in Industrial Engineering, Charlie was looking forward to working in that field when fate stepped in. In 1968, he was hired for a seasonal position with Carlsbad Caverns NP as a Fire Control aid.  He found his calling and switched gears to law enforcement and fire. He joyfully gave the next 36 years of his life to protecting our nation’s national parks and its visitors. He also found the love of his life, Marta. She joined his adventure on December 30, 1970 and they became partners and a force to be reckoned with. Their son, David, completed their family a few years later.

Over his career, he worked at Carlsbad Caverns NP, Buffalo National River, Sequoia/Kings Canyon NP, Lake Mead NRA, Arches NP, Yosemite NP, twice at Grand Canyon NP, and Bryce Canyon NP. In 1983, he saved his diving partner’s life during a diving accident at Yosemite NP. He received the Department of Interior Valor Award and was honored on the floor of the House of Representatives in Washington DC in 1985. In 2004, he finished out his career and retired as the Chief Ranger of Mesa Verde National Park. Retirement was just the beginning for him.  Marta was always worried about how he would keep busy after retirement. Her concern was misplaced. He never really retired.  After being introduced to the new pottery studio near his home, he started making pottery and discovered new ways to create. Within the year, he was running the studio and selling his work.  His days were full of pottery, backpacking and river trips. He loved taking his granddaughters on adventures. He took them hiking, bike riding and exploring, even showing them scorpions in the backyard in the dead of night with a blacklight.  At the same time, he missed the adrenaline from his time as a Park Ranger.  In 2004, after retirement, he returned to his true passion, wildland firefighting, and spent the next 15 years working seasonally. He first volunteered with the National Park Service and then the State of Utah.  He then moved on to support the local fire departments of Ivins and Santa Clara, finishing as the transitional fire chief for the newly formed joint Ivins/Santa Clara fire department. He was on his last wildland fire, digging lines and hauling equipment in 2019 at the ripe old age of 70.  Charlie freely shared his life with his family, friends and even strangers.  He was always available to mentor young firefighters and considered men and women equal in the fire world. A person of character can impact the world and what a hole is created when that person is no more. Charlie exemplified the importance of character and he will be greatly missed.

He is survived by his wife, Marta, his brothers, Jimmy and Tommy, his son, David (Christie) and his two granddaughters, Keegan and Rowen. Charlie’s wishes were to celebrate his life and chose not to have a formal service for his death. In lieu of flowers, you may choose to honor him with a donation to the National Park Foundation or, in his words, go take a hike.

from David  - My father taught me the importance of hard work, determination, toughness, compassion, and generosity.  He was the strongest man I’ve ever known. He loved to teach and to help others.  Whether it was how to change out a water pump, helping a neighbor with their fire alarm or teaching his granddaughters to make pottery.  I am thankful for all the time I was able to spend with him.  If I am able to be half as good a man as him then I will have lived a very good life.

To send flowers to the family in memory of Charles "Charlie" Milton Peterson, please visit our flower store.
Send a Sympathy Card