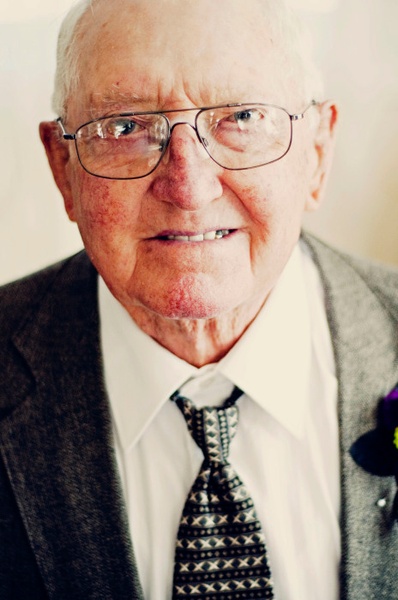 Charles was born on January 29th, 1925 to Charles Edward and Elizabeth Viola Smith Francisco.He married his sweetheart, EvaDean Reeves on December 23rd, 1948 in Fredonia, AZ. Their marriage was later solemnized in the St. George, Utah Temple on March 26, 1960.  Charles, known as Charlie to most, lived his entire life in Garfield County, Utah.  He was born and raised in Henrieville and Pahreah, Utah with 3 brothers and 5 sisters. He loved living near so many cousins and enjoyed spending time with them.

Charlie was a hard working man his entire life. As young man, he worked in road construction, the timber fields, and sheep shearing. Later, he moved his family to Tropic, where he ran a dairy and farm while also working for the Utah Department of Transportation. Charlie worked for UDOT until retirement, but retirement did not slow him down. He continued to do the things he loved, which included driving a tour bus, being a tour guide, and being a trail ride wrangler throughout Bryce Canyon National Park. Later in life, Charlie and EvaDean also ran a Bed and Breakfast, which allowed them to meet people from all around the world.  He was a great and talented storyteller and he would entertain guests with his quick wit and lively stories as he showed off the land that he loved. They say you can’t teach old dogs new tricks, but Charlie proved that to be wrong. While running the Bed and Breakfast, Charlie learned to be 5 star maid making beds and cleaning rooms.

Charlie was a true outdoorsman and loved fishing, riding horses, and hunting with his dogs. He loved these activities even more when he was able to bring his grandchildren along and teach them the ropes of being a cowboy. Charlie was a dedicated member of the Church of Jesus Christ of Latter-Day Saints. He served in many callings, but the calling he loved the most was being a Scout Master. Charlie was also a dedicated temple worker and loved going to the St. George Temple with his sweetheart. Charlie loved his children. His three daughters were the light of his life. He taught them how to work hard, how to stand up for themselves, and how give back.

Funeral services will be held on Tuesday, September 12th at 12:00 noon at the Tropic Utah LDS Church. Viewing will be from 9-11:30 AM with services following. Interment will take place in the Henrieville, Utah Cemetery.

The family would like to thank the many people that provided great care and support to Charlie including the Garfield County EMS, Garfield Memorial Hospital staff, nurses, and doctors, and  Home Health Care staff.

Arrangements are under the care of Hughes Mortuary of St. George and Cedar City, Utah. (435)674-5000.  Please visit www.hughesmortuary.com for complete obituary listings and to leave condolences.

To send flowers to the family in memory of Charles Smith Francisco, please visit our flower store.
Send a Sympathy Card