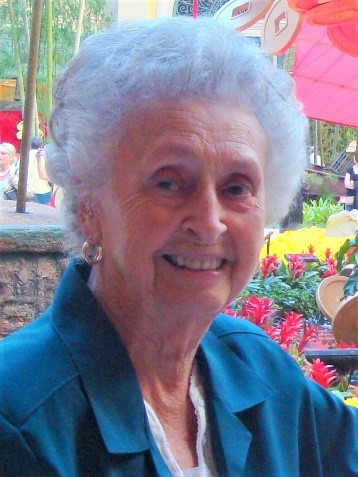 Darlene Louise Barlow, 97, passed away peacefully on Thursday, March 4, at home in St George, Utah.  She was born on September 3, 1923 in Wichita, KS, and married her husband, Raymond L. Barlow of Richfield, UT, on March 14, 1942 in the Salt Lake Temple of The Church of Jesus Christ of Latter-day Saints.  They raised three children in the Salt Lake Valley: Phillip L. Barlow, Linda L. Jones (Roger), and Leslie A. Hadley.  The couple later moved to Washington, DC, then Overton and Las Vegas, NV, and finally settled in St George, UT.

Darlene joyfully worked as a secretary for 13 years in various schools of Salt Lake City’s Granite School District. Thereafter, she and Raymond were able to travel extensively in all 50 states, using backroads and staying in national parks and small towns as much as possible to enjoy the beauty and grandeur of America.  She was a kind and loving caregiver by nature, collecting friends wherever she went, then constantly staying in touch with them by telephone, email, and lunches. She had a passion for Family History and was dedicated to finding ancestors of all her relatives, whether they were related by birth or marriage.  Her greatest love, however, was her family.  She had 5 grandchildren, 17 great grandchildren, and 8 great, great grandchildren.

She was predeceased by her husband, Raymond, and her parents, Lawrence R. Bonham and Alma Viola Brinkman, as well as and her younger brother, Harlan D. (Bud) Bonham of Overton, NV, who died last year.  She is survived by all of her children and grandchildren, in addition to her sister-in-law, Gloria Bonham, who now resides in Salt Lake City. UT.

To send flowers to the family in memory of Darlene L Barlow, please visit our flower store.
Send a Sympathy Card