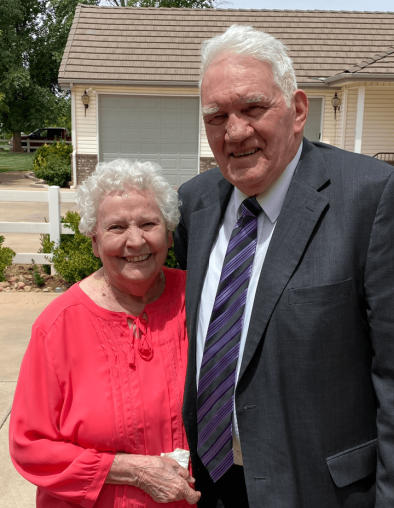 Delores Elizabeth Burmester Egbert passed quietly and peacefully from mortality to the spirit
world on August 1 st 2020 at her home in St. George, Utah. She was surrounded by her beloved
husband and several family members. She was 85 years old.
Known by her family and friends as Lorrie Egbert, she was born on 21 July 1935 in her parents’
home in West Jordan, Utah. She grew up on the family farm. Her parents are Frederick
Burmester and Frieda Barthel Burmester. She was the third of four children, two older sisters,
and one younger brother, all of whom have preceded her in death.
She graduated from Jordan High School and attended BYU in Provo. She was an outstanding
executive secretary, excelling in typing and short hand, and worked for Shell Oil Company in
Salt Lake City until she married at the age of 23.
She married Farnes G. Egbert, also of West Jordan, Utah, on August 1 st , 1958, in the Logan Utah
Temple. They originally lived on their farm in West Jordan where their first three sons were
born. In 1964 they sold their farm and bought a ranch in Metropolis, Nevada. They lived on the
ranch for over 30 years, had two more sons there, and raised their five boys on the ranch, never
having any neighbors that lived closer than 4 miles away.
She loved growing gardens, especially flowers and always had a beautiful yard with lots of them
on the ranch in Nevada. She loved people, and anyone that knew her felt her love.
In the latter part of 1994 after all of their sons were grown and married, they sold the ranch
and moved to St. George, Utah, to live closer to most of their children and grandchildren. They
have lived in St. George since that time.
Lorrie’s life has always been centered around her husband, family, and serving the Lord. Her
and Farnes have always been very active in the Church of Jesus Christ of Latter-day Saints. She
served in many different callings throughout her life. Her and Farnes served a full-time mission
together in Iowa from 2003-2005.
She is survived by her husband Farnes Egbert, her son Scott (Laurel) Egbert of Clover Valley,
Wells, NV. Her son Cory (Shelly) Egbert of Fernley, NV. Her daughter-in-law, Kaylene Egbert of
St. George. Her son Andrew (Salli) Egbert of St. George. And her son Justin (Megan) Egbert of St.
George. She is also survived by 23 grandchildren and 34 great-grandchildren.
Besides her parents and siblings, she was preceded in death by her third son Kenn Egbert.
Her private family funeral service (Due to COVID) will be held on Saturday, August 8th in St.
George. Interment will take place in the Washington City Cemetery. Arrangements are made
under the direction of Hughes Mortuary, St. George Utah.

To send flowers to the family in memory of Delores Elizabeth Egbert, please visit our flower store.
Send a Sympathy Card