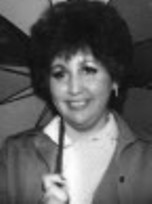 DeLoris Condie, Age 71 of St. George Utah, was born in Cedar City Utah to Lorin & Thelma Alice (Stapley) Condie on September 19, 1944. DeLoris Condie passed away peacefully on January 11, 2016 of natural causes surrounded by her children and family members. DeLoris was the third of six children and was a twin, her twin sadly passed away 7 Months later. DeLoris grew up in Cedar City until March 19th of 1964 Deloris married Jack Orvin they had five children, they were married for nearly 40 years. Jack and DeLoris later divorced in 2002. DeLoris loved to sketch and paint. She had an amazing talent with art. She shared her talents with everyone she came in contact with. She gave those talents and her time serving others. She was a caring and giving person and enjoyed helping others. DeLoris was a self-taught artist and had an ear for music like her father. Teaching herself to play the piano. She loved to sing out loud by herself or around her family. One of her favorite songs was “Sisters” she sang with her sisters. She had a funny quirky personality which truly manifested itself with lots of humor in the months leading up to her passing. She also learned how to help others with Reflexology and Iridology. The biggest devastation and the part of her soul that was lost; was with the death of her third child of only 18 months of age due to a drowning. DeLoris was on a mission to correct the negligence of the city for having large open irrigation ditches in running through residential areas. She went on a campaign reaching out to newspapers and television to change this and be-came successful, nevertheless this stole a piece of her heart her forever.  DeLoris is preceded in death by her parents, her older brother; Raymond “Ron” Condie, Her twin; Delon and her daughter Danette. DeLoris is survived by three siblings; Victor (Vickie) Condie of St. George, UT Linda (Patrick) Dougherty of West Jordan, UT, Iris (Steven) Huxhold of Pinon, Az., Her children Lorin (Remle) Orvin of Dammeron Valley, UT, Delene (Dale) Leifson of Schonaich Germany, Cameron (Sandy) Orvin of McMinnville Or., and Casey (Monna) Orvin of Santa Clara, UT and her 20 grandchildren and 13 great-grandchildren. A memorial will be held on Friday January 15, 2016 from 6:30 to 8:30 p.m. at the Hughes Mortuary, 1037 E. 700 S., St. George, Utah, 435-674-5000. A grave-side service will held in her honor on Saturday, January 16, 2016 at 2:30pm at the Tonaquint Cemetery.

To send flowers to the family in memory of DeLoris Condie, please visit our flower store.
Send a Sympathy Card