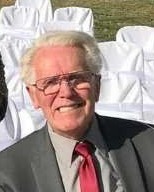 Dennis Craig Thompson of Hurricane has gone home to his Heavenly Father on September 7, 2022, after a long struggle with Dementia.

Born on January 31, 1940 in Breckenridge, MN to Clarence and Esther Skatvold Thompson.

He was raised in Rosholt South Dakota where he lettered in Basketball, Football, and Baseball. He drove truck for Albertsons and Walmart and retired at the age of 66. He was an awesome grandpa and his grandkids adored him.

Preceded in death by his parents Clarence and Esther Thompson and his sister Carole Shultz.

To send flowers to the family in memory of Dennis Craig Thompson, please visit our flower store.