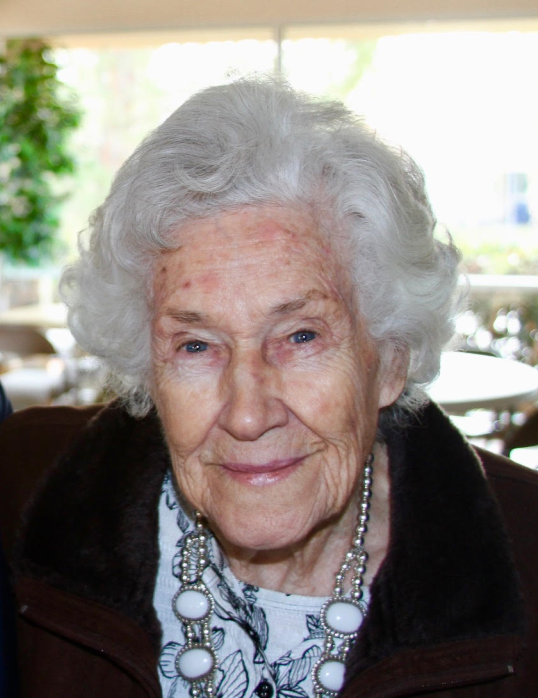 Our beautiful loving wife, mother, and grandma returned home to her Heavenly Father in peace and serenity on Sunday May 10th, 2020. She left this life surrounded by many of her loving family members with her sweetheart of nearly 71 years holding her hand as he has since they first met in 1948. Edna was born the youngest child of Edmund Bennett Varney and Helena (Koch) Varney on April 2nd 1931 in Los Angeles, California. Edna grew up in North Hollywood and was raised riding streetcars to her Aunt Lottieâ€™s and visiting her Grossmuttiâ€™s house on Lankershim Boulevard. She attended North Hollywood High School and was friends and neighbors with many of the stars of young Hollywood. Her senior year of high school she met Gary Gray Gibson and after some persistence on Garyâ€™s part Edna decided to go out to a movie with him and they have been inseparable ever since. Edna will forever be Garyâ€™s â€˜babe.â€™
On their way to a friends wedding on August 6, 1949 they decided to take a slight detour and were wed in Las Vegas, Nevada. They were later sealed in the Los Angeles Temple on December 18th 1958. Edna and Garyâ€™s early years together were spent in Southern California where Edna enjoyed working as a chocolate dipper for Seeâ€™s Candies, as a key puncher for Lockheed, and as a very early employee for Easton Aluminum making arrows in their garage. Edna and Gary also enjoyed working in one of Ednaâ€™s families businesses as beekeepers. Gary and Edna were blessed with three children: Gerry Gray born November 7, 1951, Garret G born March 23, 1953; and April Helena born July 26, 1956. Ednaâ€™s children were her greatest pride and joy and she remained incredibly proud of them to her last moment.

Edna and Gary moved from Southern California to Garyâ€™s childhood home of Southern Utah in 1976 and built a home in Washington City where they have lived ever since. They would commute back and forth between California and Utah building their home themselves on the weekends until it was complete. All three of their children would follow and raise their families in Southern Utah as well. Gary had worked in the flooring industry in California and after a few years in Utah they acquired a flooring store and renamed it Gibsonâ€™s Carpet Gallery. Edna and Gary sat at the same desk and worked tirelessly building the business into a well respected member of the St. George community with both of them working in the store into their late 80â€™s. While living in Southern Utah Edna developed many hobbies and interests including oil painting, genealogy, real estate, antiquing, and square dancing with her beloved Gary. Above all, as her family continued to grow; Ednaâ€™s highest interest became her grandchildren, great grandchildren, and great great grandchildren.

Edna is survived by her eternal companion and protector Gary; her loving boys, Gerry (Janice) and Garret (Patty), her grandchildren Amy (Greg) Roper, Bob (Tricia) Gibson, Joel (Shauni) Gibson, Blair (Megan) Gibson, Beau Gibson, Geri (Ryan) Groskreutz, and Danny (Natascha) Gibson as well as 12 great grandchildren and 4 great great grandchildren all of whom adore her and will miss her dearly. She is preceded in death by her parents, her siblings, and dear daughter April as well as many pets whom Edna will be so happy to be reunited with. Gary would like to thank Kristin and Channing from Dixie Hospice and the nurses from Mabel Meldrum Home Care for taking such great care of his babe in her last moments. He and the family would also like to give a sincere thanks to Garret and Patty for everything they have done and continue to do for them in making sure all of their needs are met.
A graveside service will be held to celebrate Ednaâ€™s life at the Hurricane Cemetery on Saturday May 16th, 2020 at 2:30 pm. Arrangements are made under the direction of Hughes Mortuary, 1037 East 700 South St. George, Utah, (435) 674-5000. Edna loved flowers and the color blue. Please feel free to send them to the mortuary in her honor.

To send flowers to the family in memory of Edna Achsah Varney Gibson, please visit our flower store.
Send a Sympathy Card