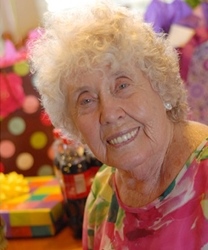 Our mother and Grandmother, passed away peacefully and returned to her father in heaven January 10, 2016, surrounded by her loving family. Rose was born on September 7, 1920 to George Myron Bybee and Ruhama Victoria Adair in Tropic, Utah. She had nine siblings and spent the majority of her childhood and Tropic.  Rose joined the United States Navy in 1941 and served four years in World War II in the dental field. After the war, she married Douglas Harding Bent in Las Vegas, and the marriage was later solemnized in the Salt Lake City Temple. She attended Brigham Young University, Utah Valley Technical College, and in her later years, earned a Bachelor’s degree in Psychology from Southern Utah University. Rose served faithfully as a member of the Church of Jesus Christ of Latter Day Saints, serving in many Church callings. She is survived by children; Victoria Bell Tarinelli (Richard), Robin Rose Jennings, Harold Douglas Bent, Danna Douglas Bent, Chris Swindells (stepdaughter), sister-in-law, Jane Bybee, 15 grandchildren and 33 great-grandchildren. She was preceded in death by her husband Douglas Bent and daughter, Kimberly Rose Bent. Funeral services will be held at the Washington LDS Chapel, 82 N. Main, Washington, Utah at 1:00 pm. A viewing will be held at 12:00 noon before the service. The family wishes to express profound gratitude to all of her caregivers at the Ivins Veterans Home and Journey of Hope Hospice.

To send flowers to the family in memory of Farris Rose Bent, please visit our flower store.
Send a Sympathy Card