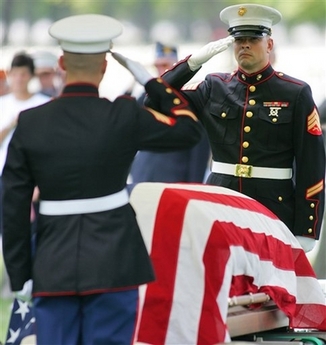 Frank Rajkovich, 91, of St. George, Utah, quietly passed away on Wednesday, May 24, 2017 after just a few days of Zion’s Way Hospice Care. He was born on December 19, 1925, in Hurley, Wisconsin to Steve and Agnes (Punich) Rajkovich, originally of Austria.

Frank served in China for the Marine Corps as a Field Music Corporal for several years. He was proud to be a bugler.

A resident of Las Vegas for over 65 years, Frank never waived on his love of the Green Bay Packers; even becoming a stock owner on his 86th birthday.

Frank was a claims representative for State Farm Insurance for 15 years and finally turned his camera hobby into an amazing career when he became a professional photographer. He was very proud of his collection of actresses, actors and showgirl photos.

Frank will be missed dearly by his daughter, Debbie (Kenneth) Knight of Maumee, Ohio; and three grandchildren {Bryon Kinsman, Nicole Knight and Aliya (Donovan) Haupricht}, and one great-grandson {Mason}.

Those who knew Frank would not be surprised to know that he was lucky enough to have loved two amazing women. Frank married the beautiful Sandra Brunner Rajkovich in 1969. Unfortunately, their love affair would come to an abrupt ending in 2000 when Sandy passed away from heart failure. Frank was lucky enough to fall in love again and marry the vibrant Betty Crinite Rajkovich in 2006.  Within five hours of Frank’s passing, Betty fell into the Lords hands too.   And as God would have it, Frank’s brother Steve “Hap” Rajkovich of Round Lake Beach, Illinois followed also.

A memorial service will be held later this fall at the Veteran’s Memorial Cemetery in Boulder City, Nevada.

To send flowers to the family in memory of Frank Joseph Rajkovich, please visit our flower store.
Send a Sympathy Card