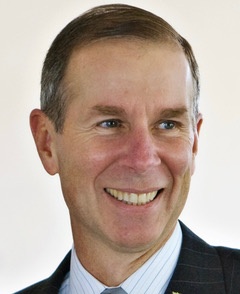 Rick was raised in a military family and traveled the world as a child. He attended the University of Illinois on a NROTC scholarship. Rick became a helicopter pilot and served in the Navy for 34 years in many leadership roles before retiring in 2008 as a Rear Admiral.

Rick was a humble and kind man with a wonderful sense of humor. His smile softened everyone he met. He listened, was not quick to judge, and took care to consider all points of view. Rick served his country by leading, commanding and teaching the next generation of Sailors and Marines.

Rick was an incredible father who loved his children, taught them to be kind and encouraged them to make their own paths. He instilled values in them through his own example, and supported them as they grew into adults with their own families.

Rick loved his wife, Cathy, who loved and supported him every step of the way. He received remarkable and loving care during his last few years at the Southern Utah Veterans Home in Ivins, Utah.

Rick is survived by his wife, Catherine A Ruehe; his children Emily Puckett and Eric Ruehe; his grandchildren, Iyla Ruehe and James Puckett; as well as his brother John Ruehe and sisters Ann Adams and Cathy Moore Ruehe.

In lieu of flowers, Rick’s family requests that you consider donating to: The Association for Frontotemporal Lobar Degeneration, theAFTD.org

To send flowers to the family in memory of Frederic Richard Ruehe, please visit our flower store.
Send a Sympathy Card