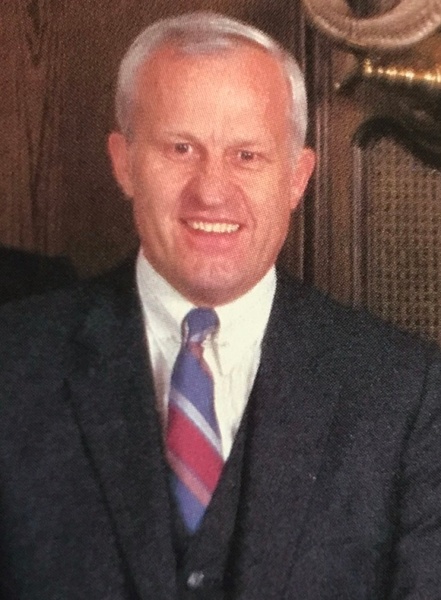 J. Gary Sheets passed away peacefully at home on September 23, 2018 at the age of 84.  Gary was born in Richfield, Utah on January 28, 1934.  After losing his mother at a young age, Gary was raised by his maternal grandmother Eva Peterson, a loving woman who taught him the value of hard work and independence.  Richfield was always an important part of Gary’s life, no matter where he lived.  The small-town values and work ethic he gained as a boy drove him throughout his life.  He was senior class president and a two-sport star at Richfield High School, earning All-State honors in basketball.  Gary attended the University of Utah where he was a Sigma-Chi and earned the nickname “Foggy” Sheets for his propensity to not pay attention to certain important details.  After a year at the University, he served a mission for the Church of Jesus Chris of Latter-Day Saints in the New England States Mission.  When he returned from his mission, he met a spunky, green eyed girl named Kathy Webb who won his heart.  He and Kathy were sealed in the Salt Lake Temple on June 30, 1958 and became the parents of four children, three girls and a boy.

After Kathy’s untimely death, Gary was blessed to meet Diane Jackson, a true miracle from Kaikohe, New Zealand, whom he married in the Salt Lake Temple on July 3, 1987.  Diane not only brought an additional son and daughter to the family, but also became a new “Mum” for Gary’s four children, and an amazing “Grandma Di” for his growing clan of grandchildren.

Gary was truly a born salesman.  His ability to connect with different people and win them over was legendary.  He epitomized the saying “a stranger is just a friend waiting to happen”.  He touched numerous lives and always would find ways to quietly help people in need.  One of his proudest achievements was serving as the founding Chairman of the Children’s Miracle Network Foundation, an experience he mentioned often toward the end of his life.  Gary also had a great love for all types of animals and would often regale his family with stories of random stray animals he stopped to greet or help, always commenting on how “beautiful” they were.

Even with a nickname like Foggy, one thing he would never forget was to tell his children and grandchildren how much he loved them.  It was a daily occurrence and something that will truly be missed by his family.  Gary had a knack of making you feel like you could accomplish anything in life, and would remind you of your greatness often, even if exaggerating at times.  He was free with compliments, stingy with criticism, generous with a smile, and always the eternal optimist.  Gary faced more than his fair share of trials throughout his time here on earth, but he always found a way to see the positive in life and not let the trials diminish his faith in his Heavenly Father and the gospel of Jesus Christ.  His genial nature, steady fortitude and humble dedication were an inspiration to many.

To send flowers to the family in memory of Gary Sheets, please visit our flower store.
Send a Sympathy Card