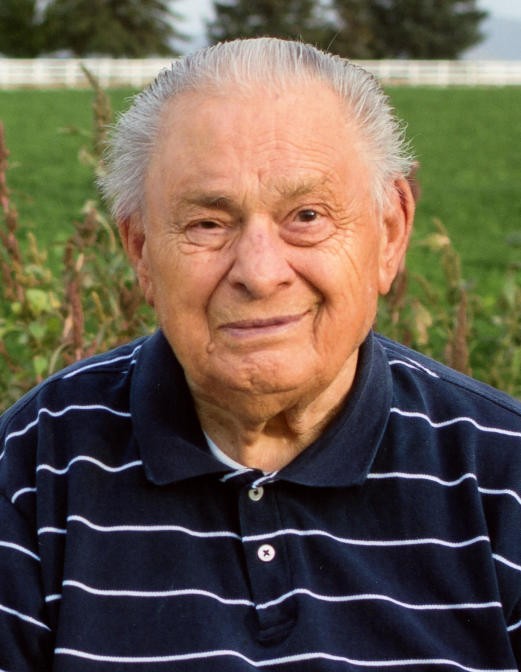 George “Hugh” Gale was born in Red Mesa, Colorado May 26, 1925 to loving parents, George Marlin Gale and Evelyn Slade.
He grew up in the mountain valley of Durango, Colorado. After graduation Hugh signed up for the Army Air Corps and trained as a pilot in WWII. He served as a ball turret gunner in a B-24 bomber. When the war ended, Hugh served a full-time mission for the Church of Jesus Christ of Latter-day Saints in the Northwestern States Mission. His mission made him want to always be a missionary. He took every opportunity he could throughout his life to share the gospel.
Not long after his mission he met and fell in love with Nina Jarvis. They were married in the Idaho Falls Temple on June 14, 1949. This union gave them six children.
Hugh attended Brigham Young University where he received his bachelor's degree in Physics. Throughout his life he worked for Boeing and the US Government working on missiles, hydrofoils, the Chinook helicopter,the Saturn 5 rocket booster to land men on the moon, and the Trident submarine. His jobs took him to many locations around the country. Hugh always made these moves to best support his family.
Hugh was always a faithful member of the Church of Jesus Christ of Latter-day Saints. He taught his children never to turn down a Church calling. He served in many callings in the Church: Branch President, Stake Clerk,Explorer Post Leader, Sunday School Teacher,Family History Consultant, and Temple Ordinance Worker in the Seattle Temple. Hugh passed away in his home on November 24, 2020. He is survived by his children, Mike (Karen), Cherie (Joseph) Edmunds, Jeff (Sandy),Bill (Rose),Julie (Mark) Johnson,Heidi (Galen)Richards, 27 grandchildren, 48 great-grandchildren, one great-great-grandchild,and his youngest brother, Charles LeRoy Gale. He was preceded in death by his wife, Nina Jarvis Gale,his parents George Marlin Gale and Evelyn Slade, three brothers and two sisters.

To send flowers to the family in memory of George Hugh Gale, please visit our flower store.
Send a Sympathy Card