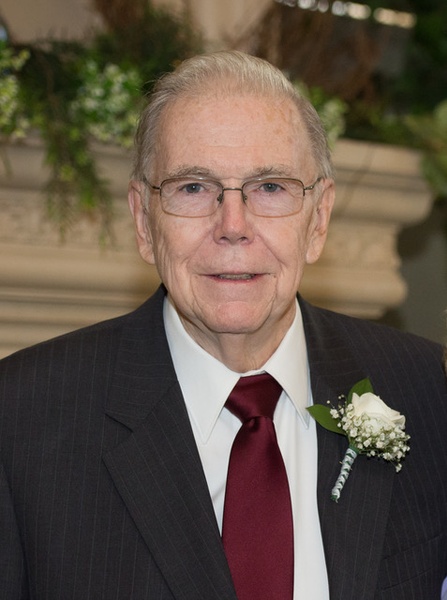 Gilbert Moen Jr. was born of goodly parents on November 3, 1936 in Kenilworth, New Jersey.  His parents Gijsbert and Johanna Moen were converts to the Church of Jesus Christ of Latter-day Saints, having been baptized in Rotterdam, Netherlands.  Warned by their church leaders that “bad times” would again come to Europe, Gil’s parents and his two older sisters, Emma and Gertruida, immigrated to the United States.  The family was in route to Utah; however, they were caught by the Great Depression and only made it as far a New Jersey.

Gijsbert, Gil’s father, became a naturalized citizen of the United States in September 1935 at which time he changed his name from Gijsbert to Gilbert.  Proud of his new American name he gave it to his son.

In 1938, the Gilbert Moen family became charter members of the East Orange Ward of the New York Stake.  These were difficult years as rationing was everywhere and many cousins, aunts, and uncles were serving the in the military.  Gil Jr.’s parents were called to serve as Stake Missionaries to assist Church members who were shipping out to the War in Europe.  Despite the difficult times, Gil’s mother read to him every night out of the Bible.  Young Gil gained the reputation of being the resident expert on the Old Testament.

In 1941, Gil Jr. attended Franklin Elementary School in Union, New Jersey.  He was not a great student as Dutch was spoken at home and English at school.  Learning to read was very difficult.

Also during this time, Gil became interested in basketball.  He went on to become Team Captain of the Varsity High School Basketball team, at which time he broke the existing score record.

Upon High School graduation, Gil Jr. attended Brigham Young University with a basketball scholarship.  His freshman year at BYU was very difficult.  He could not get enough to eat and lost 30 pounds by Thanksgiving.  The rigors of college sports coupled with the demands of math and science classes caused Gil to rethink the benefits of college sports.  He returned and the next three years at BYU were some of the best in his life.  In his senior year he met a freshman named Marolyn Kay Barton.

In 1958, Gil received an offer of employment from the New Jersey Bell Telephone Company.  He had been a student engineer the previous summer.  For the next forty years Gil was associated with the Telephone Communication Industry.

Gil joined the New Jersey National Guard in 1959.  In time he became a Sergeant and ran the Communications Center for the 50th Armored Division.  He served for 9 years.

In June of 1961, Gilbert Moen Jr. married his college sweetheart Marolyn Kay Barton in the Church of Jesus Christ of Latter-day Saints Temple in Salt Lake City, Utah.  They lived in New Providence, New Jersey.  In 1966 Marolyn gave birth to their first of eight children.  With help from Gil’s family they built a home in Basking Ridge, New Jersey.

The Church was growing in New Jersey and in 1975 Gil was asked to serve as councilor to the Bishop of the North Branch Ward.  At the same time, he was also asked to organize a company and bid on the proposed new chapel, as local contractors were inflating their bids due to a struggling economy.  Gil was awarded the contract, organized ward members, and with the help of local contractors, built the North Branch Chapel.  The project took 400 days and was dedicated as a fully paid chapel.

In 1978 Gil was called to serve as Scoutmaster of LDS Troop 603.  He remained active in scouting for over 10 years as all five of his sons, and just about everyone else in the troop, became Eagle Scouts.  He became known as the “Rain Maker” because it rained whenever he went on a camping trip, which was often.

In 1983, Gil was asked to serve on the staff of the Bell Atlantic Company, an assignment he gladly accepted and one that required him to travel around the country.  In 1991 Gil retired from Bell Atlantic and became an employee of Bell Communications Research where we worked until 1998.  That was the best job of his career.

Gil and Marolyn retired to St. George, Utah where he became very involved in Family History.  He wrote four books about his extended family.  At one time all eight of his children were residents of the State of Utah.  Gil often said, “Pop, we finally made it to Utah!”

In 2005, Gil was diagnosed with stromal cancer.  The surgeon removed a tumor the size of a football.  Gil made a full recovery.

Gil often said his greatest blessing in life was his wife Marolyn, his children, his Church, and being a citizen of the United States.  He believed in a living God and in His Son Jesus Christ as Savior and Redeemer of the World.  He believed that Apostles and Prophets walk upon the earth today.

If he could give a piece of advice today it would be this: “We are in the fullness of the Last Days; a period of time when men’s hearts will fail them.  Do not let the words or actions of others deny you the blessings of the Gospel of Jesus Christ.”

Gilbert Moen Jr. was reunited with his parents early Wednesday morning, March 30, 2022 after suffering the effects of a massive stroke five months prior.

To send flowers to the family in memory of Gilbert Moen Jr, please visit our flower store.
Send a Sympathy Card