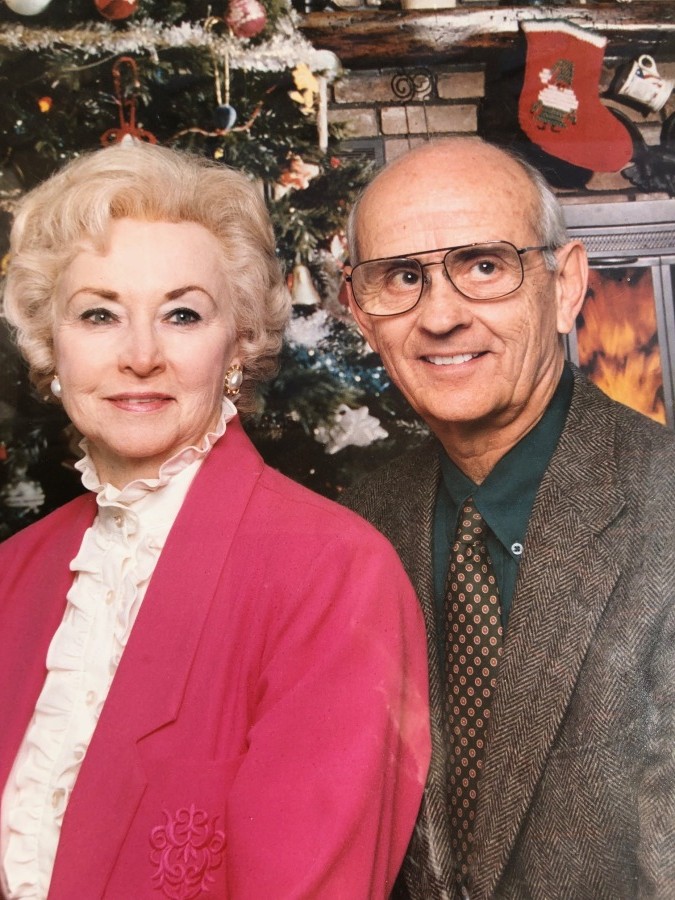 Gloria Sue was born to Bessie Mae Rodgers and Kimmie Roberts on July 29, 1929. She brought “Sunshine” to their home and was doted on by her sister Mary Jeannette, brother Jerry, and townsfolk in Wilson, Oklahoma.

Gloria’s father worked for Shell Oil and they were given a house to live in near the refinery. The home and the railroad used to transport oil were separated by a lone fence. When small, Gloria would climb the fence, wrap her legs around the top post for balance, and wait. Upon hearing the whistle, she would wave and continue waving until the conductor was out of sight. A momentous occasion occurred the day the conductor tossed her a huge chocolate bar and watched her scramble to retrieve it amid the weeds.

Gloria’s fame began at the age of three. She had an incredible voice and sang with enthusiasm; she soon became the darling of the town. Her repertoire expanded but the most requested song was “I love you, Nellie McKay.”

The weather's cool,
the folks are fine
I'm in bed each night at nine
P.S. I love you

Gloria learned to tap dance, play the drums, and became a soloist with a band. Her first attempt to drive took place, without permission, when she was 13 years old. She and her adventurous friend borrowed a pickup not knowing that a stick-shift vehicle required them to use the clutch to shift gears. The terrifying grinding mortified them.

Later, Gloria met a handsome man named Everett Calvin Stangle,  better known as EC. The fireworks began and on the first date, they danced the night away at The Glider Room on an airbase. He asked her for a date the following night and confidently asked her to marry him. The rest is history. He was Gloria’s darling and she was his sweetheart. Gloria continued to sing, but her love songs were always dedicated to her darling EC.

The Stangles were blessed with a daughter, Lynda Faye and three grandchildren, Diane, Roger, and Billy. They also had “Baby, Sandy, Andre,” three dogs who were part of the family and a cat named, “Honey.” They possessed a spirited passion for travel and visited China, Hong Kong, Mexico, Alaska, and Canada. They also toured the USA in their RV.

Gloria passed on May 26, 2019, just two months after her beloved EC died. Each day since his death she has called out to him, begging him to come for her, always pleading for relief of pain. Recently, Gloria was asked where her favorite place in the world was.  She answered,  “My favorite place is where EC is.”  Today she is with EC her “Darling” and it's where peace, beauty, and love abound!

To send flowers to the family in memory of Gloria Sue Stangle, please visit our flower store.
Send a Sympathy Card