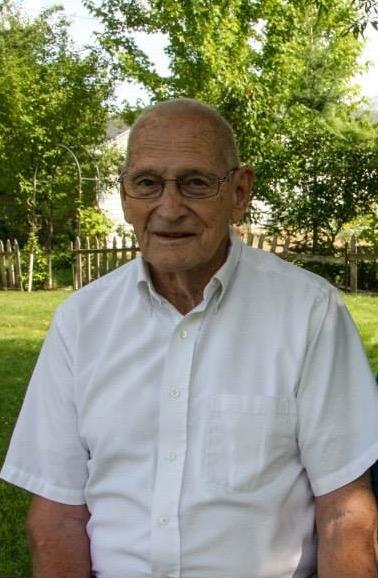 Gordon Lew Mar Empey passed away August 17, 2016 surrounded by his loving family. Gordon, known to his friends as Lew Mar, was born April 4, 1932 in St. George, UT to Gordon and Lois Cannon Empey. He married the love of his life, Valeen Nelson on September 13, 1952 in the St. George Utah LDS temple. Together, they had six Children: Shirlene Kimball, Robert, Ashley (Diane), Gordon, Darren and Kathy Crawford (John). Lew was an active member of the Church of Jesus Christ of Latter Saints. He held many callings, including that of secretary for many church organizations including that of ward clerk. He was an active member of the US army during the Korean War, held a deep love for his country, and was a true patriot. Lew Mar was a mechanic and could always be found helping others with their cars. He worked for the same company for over 50 years and retired from Newby Buick as the parts manger. He loved the outdoors and camping, wood refinishing, model cars (no FORDS!) and puzzles.  He was preceded in death by his wife of 61 years; daughter Shirlene; his parents; step father, Galen Lang; sister La Mona Tauson, and 2 great grandchildren.   He is survived by his children, 14 grandchildren; and 19 great grandchildren and one on the way. His loving sister,  Aileen Empey Bundy and many nieces and nephews. A special thanks to Rocky Mountain Hospice, especially his nurse Suzanne Brooking for being so fantastic in her loving care and going far above and beyond her duties. A viewing will be held Wednesday August 24, 2016 at Hughes Mortuary from 6:00 to 8:00 pm. The funeral will be held Thursday, August 25th, with a viewing starting at 9:30-10:30. Funeral at 11:00 am. St. George East Stake Center. Interment at Tonaquint Cemetery.

To send flowers to the family in memory of Gordon Lew Mar Empey, please visit our flower store.
Send a Sympathy Card