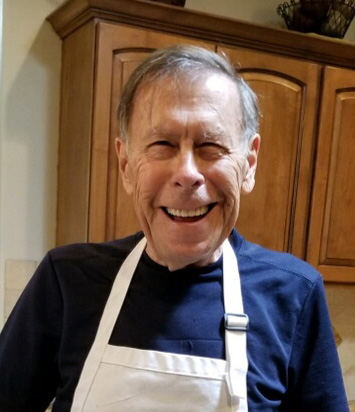 St. George, Utah â€“ Harry Arthur Aldrich III, passed away Tuesday, January 21 st , 2020. He was born on February 14th, 1942 in Huntington, New York to Harry Arthur Aldrich Jr. and Pearl Ann Hentnik Aldrich. He married Mary Kathleen Boone on November 14 th , 1964 in Farmingdale, New York.
Harry was raised on Long Island, New York. He enjoyed both watching and playing baseball and football. He loved being an only child and taking cross-country car trips in summers. He met his wife, Mary, at age 21, and knew she was the one because together they would never run out of things to talk about. He was drafted into the military while engaged to Mary. He served in the United States Air Force during the Vietnam war. After being released from duty, Harry and Mary settled and raised a family with three children on Long Island. He worked at Brinkmann Instruments for thirty three years, and spent five years working for the IRS, waiting for Mary to retire from teaching.

Harry had a passion for cooking, especially while listening to Simon and Garfunkel, Rolling Stones, Meatloaf, or the Eagles. He also enjoyed golfing, reading, and most especially, eating and engaging in good conversation outside on the deck. Harry and Mary moved to St. George thirteen years ago. They spent their retirement years traveling around the world, spoiling grandchildren, and participating in community activities. Harry was baptized into the LDS church on January 23 rd , 2016, and sealed to his sweetheart in the St. George temple on July 1 st , 2017.

Funeral services will be Monday, January 27 th at the Tonaquint LDS Chapel located at 1068 West Chandler Drive, St George. The visitation will be at 10:30, with a service at 11 am.

To send flowers to the family in memory of Harry Arthur Aldrich, please visit our flower store.
Send a Sympathy Card