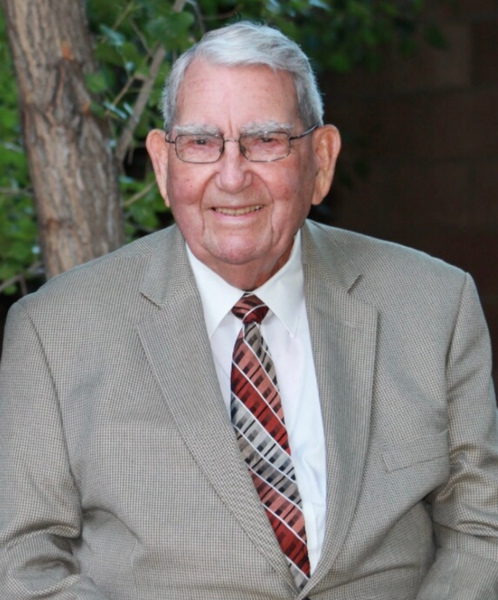 Harry was born May 8, 1927 in rural Utah County. It was in a farming area known as Vineyard. That area is now known as Orem, Utah. Harry is the 6th of 8 children born to Harry Livion and Hulda Bunnell Orvin. Harry's father owned and operated a dairy farm. In addition to the hay and grain raised to feed the livestock, the farm had fruit orchards and row crops that had to be weeded and harvested. The whole family worked the farm, thus there was no idle time to get into much trouble while growing up.

Harry received his primary education at Union School in Vineyard, junior high and high school at Lincoln High io Orem Utah. This is where he met his bride to be Beth Jones. He fell madly in love and she waited for him to serve in the United State Maritime Service during WWII. His ship transported troops and equipment to the war front. After the war was over, they transported food and building supplies to the war-ravaged Europe and Asia.

Harry and Beth spent the first 8 years of their marriage in Utah County where harry worked for Cloverleaf Dairy and Holsum Bread Company. In 1956 they moved to Phoenix/ Mesa Arizona where they raised their family. He continued working in the bread trades in 1988 when he took a position with JMI, inc. as a commercial Insurance Appraiser-Engineer-Auditor. During the 20 years with JMl Harry became assistant manager of the AZ office. He became Vice President and managed the San Antonio, Texas area and later the Great Falls Montana Office acquiring some owner ship in JMl Inc.

ln Harry's spare time he loved the game of golf. He enjoyed the peacefulness of the golf course and the great friendships that were there over the years. He was also very talented in keeping his yard beautiful with flowers.

After retiring in 1990 he and Beth accepted a mission call from The Church of Jesus Christ of Latter-Day Saints to serve for 18 months in the British Isles. A few years after they were released from that calling, they accepted another call to serve in the Manila Philippines Temple. Serving these two missions were the highlights of their lives.

Most of Harry's adult life he served and lived his faith. Positions he held were Eider's Quorum President, High Priest Group Leader, Counselor in Bishopric's served on two High Councils, Branch President and twice as a Bishop. He also enjoyed several years as a temple ordinance worker in the St George Temple.

To send flowers to the family in memory of Harry Stephen Orvin, please visit our flower store.