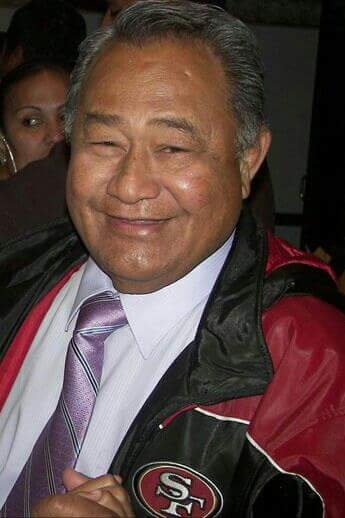 Hitler Filoileolo Veletaloola Maui’a, while at home surrounded by all his children and grandchildren, took his last breath at the age of 75 and left this worldly existence to take his place next to his Eternal Companion in the eternities. Hitler was born January 31, 1940 in Aoa, Am. Samoa to Kolone Feafeaga Moea’I of Faleniu Am. Samoa and Tolupene Filoileolo Maui’a of Aoa.  He is #7 of 11 brothers and sisters. He was raised and spent his childhood in Faleniu.  As a teenager, he moved to Laie, Hawaii where he attended Kahuku High School… Red Raider For Life! He later, as a young adult, moved to San Francisco, and L.A. to “shoot the cruise” before moving back home to Am. Samoa. In the late 50s early 60s my dad went back to Laie, Hawaii for two years as a Labor Missionary to help in the building of BYU Hawaii and the Polynesian Cultural Center. It is said that, Labor Missionaries were  building “ A monument to the Living God that his children could come here and learn and in turn go forth as genuine gold. “ Dad ended up going back home to Samoa after his time as a Labor Missionary then later returned in 1976 with his family in tow to work for P.C.C.  Then later for B.Y.U. where he stayed and ended up retiring at the age of 65 in 2005. My dad had a passion for Baseball.  He played it for as long as he could. He later became a tee ball/baseball coach where he was able to help introduce many kids from Laie to the sport of baseball.  If anyone knows my dad, there are probably three things that he loved the most, besides the Gospel, his family and friends, it’s his SAN FRANCISCO 49ERS, SINGING AND DANCING. On August 4th, 1968.  Dad married the love of his life and his Boss Lady Sinei Tafili Malepeai from Faleapuna/Falefa/Moata’a.  Together, they had 6 kids, Alice Kolone, Carol Manuosefusi (Ropati) Tiatia, Raewyn Fetolofa’I, Mae Toe (Sosaia) Tafuna, Brandon (Mandi), Celestial Fofoga and through the years they were blessed with 23 grandbabies; EJ, Itila (Fatso), Elder Filo Mauia, Sister Tofu Tiatia, Viliamu, Pululipano, Jerrik, Katee, Sinei, Melelose, Polenisia, Mailelatamai, Toa, Carmyn, He’I’Onevai, Vaiaoga, Tolupene, Vaaelua (Deceased), Shauna, Amona, Abishai, Tomasone, So’ona. He is preceded in death by his Boss Lady Sinei and his grandbaby Vaaelua Tiatia. Funeral services will be on Saturday August 1, 2015, at the Mulberry Chapel, 3381 Mulberry Dr. St. George UT 84790. Family and open viewing is from 9a to 1230p. Bishops service will follow at 1p. Interment will take place at the Tonaquint Cemetery.

To send flowers to the family in memory of Hitler Filoileolo Maui'a, please visit our flower store.
Send a Sympathy Card