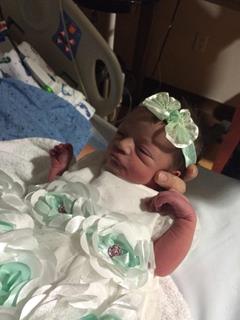 Our Beloved Daughter Hollie LaRee Powell was born October 9, 2016. Shortly after she came into our lives our Sweet Angel was called home on October 13, 2016. She was survived by her wonderful parents Terrence Powell and Morgan Wood along with her older brother David Ivan Wood, Her grandparents David and Judith Wood, Rocky and Cynthia Powell. Hollie was preceded in death by her grandmother Amanda Ellis. She was surrounded by many other amazing and loving family members as well. But while her life was short it touched the hearts of many and will never be forgotten. There will be a viewing held for Hollie on Sunday October 16, 2016 at Hughes Mortuary 1037 E. 700 S. St George Utah at 3:00 PM.  (435) 674-5000

To send flowers to the family in memory of Hollie LaRee Powell, please visit our flower store.
Send a Sympathy Card