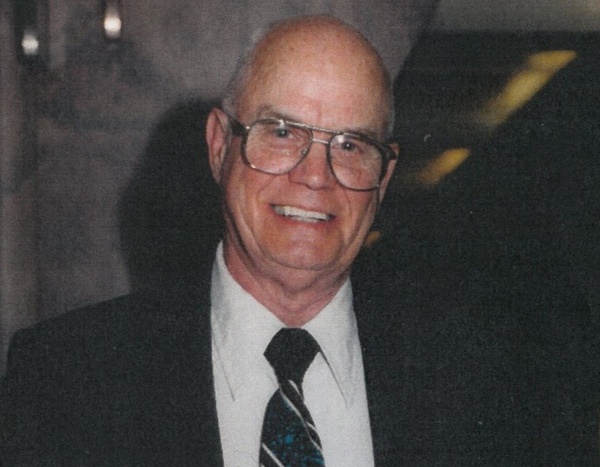 Hubert (Hugh) B. Erwin passed away on July 1st, 2022. Hugh was born in Louisville, Kentucky to Floyd Dalton Erwin and Hallie Bell Lile Erwin on a hot day of July 5, 1928. He lived in Kentucky until jr. high and high school years when they moved to Ogden, Utah. He had one brother, Blanford, and one sister, Madolyn. He has always been an active member of the Church of Jesus Christ of Latter Day Saints. When his family moved to Mesa, Arizona after Hugh's high school graduation he was called to serve a rather unusual mission from there. He was called to the Central Atlantic States Mission to be part of the Centennial Chorus and later a quartet that traveled throughout NC, VA, and W. VA singing for schools, community events, the radio and even TV. They won many awards and were the group asked to sing at the capital unveiling of the Brigham Young statue in Washington DC. They alternated these programs with regular missionary service also. When he finished his mission the country was at war in Korea and every young man was being asked to serve so college had to be postponed. Hugh joined the Air Force. They recognized his talents and he was asked to be a member of the Air Force Band as a percussionist and a soloist. It was a hard transition to go from serving a mission to immediately being thrown into a barracks with rough boys from big cities who loved to torment him at every turn but he survived and served faithfully. He always felt a little disappointed that he wasn't asked to serve on the battlefields of Korea rather than be stationed in the frozen lands of Fairbanks, Alaska. After his military years were over he became an award-winning salesman for Sun River in Arizona. He also took many safety courses to become the Fire Marshal for Phoenix and then a safety director and EMT in many government areas as well as private industry. He spent the last 15 years of his career as a Senior Instructor at the National OSHA Institute in Chicago area where he traveled throughout the world teaching courses and training employees. He also branched out as a sole proprietor and copyrighted OSHA manuals which he sold thousands of and used as texts for classes. His church experiences were equally varied. He has served as a Branch President, Elder's Quorum President several times, Ward Mission Leader, teacher in many wards plus a chorister, choir director, etc. Hugh is the proud father of Matthew (Heather) Erwin, Dennis (JoAnn) Erwin, Daniel (Dianna) Erwin, Barry (Glenda) Pfister, Teresa (Cory) Kellum, Kim Erwin, and Ruth (Christopher) Strommer and proud step-father of Cindy (Bradley) Thompson and Nancy Abbott. He was preceded in death by his parents Floyd Dalton and Hallie Erwin, his brother Blanford, one son Larry Erwin, and wives Alma Marguerite Wilhelm and Melba Jean Sabin.

He has been married to Verna Ruth Harris Erwin since 1976 and they have enjoyed 45 years together. After retirement they have served missions to Cove Fort (where they survived the Milford Flat Fire ), to the Brigham Young Winter home and Jacob Hamblin home here in St. George, and to the Mormon Handcart Historic Sites in Wyoming where they served at Martin's Cove. Hugh was an ordinance worker in the Washington DC temple for 2 years, the Raleigh NC temple for 9 years and the St. George temple for 6 years. His hobbies included recycling and repurposing everything, carving walking sticks for friends, making shell lamps when he lived near the coast, and wood chests and benches. He enjoyed reading the scriptures and had many memorized.

Hugh's beautiful voice, his sense of humor and desire to serve and keep busy at all times will be missed by all. His funeral will be at the Bloomington Hills chapel at 750 Ft. Pierce Drive on July 8th at 10:00am. There will be a viewing the evening before at the church from 6-7:30. The interment will be at the Tonaquint Cemetery immediately following the funeral.

To send flowers to the family in memory of Hubert (Hugh) B Erwin, please visit our flower store.
Send a Sympathy Card