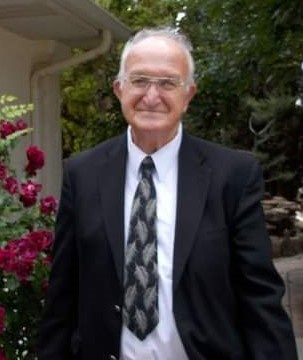 Jack Nielsen, age 89, passed away from a stroke at the hospital in St. George, UT 21 April, 2022 with his devoted, loving wife Estela, son Danny, and daughter Delia at his side. Jack was named Jackie Louis Edward Nielsen when he was born 11 September, 1932 in Brigham City, UT to Rose and Louis Nielsen. Jack said, "in my early years I happened to win the baby beauty contest in Brigham City." He said later on he couldn't brag so much!

He grew up enjoying fishing and hunting with his dad. Later he became an accomplished roller skater and was scheduled to perform in Ogden, UT. Before he could perform, however, the Korean War was raging, so he joined the Air Force. Jack served many years in the Air Force and was entrusted with protecting some very highly classified materials. He served as the personal body guard to General Curtis LeMay, the U.S. Air Force Chief of Staff, and accompanied him to many parts of the world.

After the Air Force, Jack worked for a private security firm in Southern California and helped protect the early astronauts. He also built up a successful landscaping business on the side. During his California days he married his first wife Dorothy, and they had 2 children together, Danny and Linda. After Dorothy died, he married Estela in 1990 in the Los Angeles Temple. Estela had 2 children, Delia and David, at the time, and Jack took them on and raised them as his own. 29 years ago, they moved the family to Ivins, UT. Jack enjoyed landscaping their home and was noted in the area for the numerous, big, colorful Koi fish he raised in the large ponds he built behind their house.

Jack was an extremely faithful and devoted member of the Church of Jesus Christ of Latter-Day Saints with an unshakable testimony of his Savior Jesus Christ and His Restored Church. He served valiantly in many church callings in Ivins and was an ordinance worker in the St. George Temple for over 23 years.

Jack loved his family deeply. He is survived by his wife Estela, sons Danny and David, daughters Linda (Joe) and Delia (Kevin), his brother Ron, 7 grandchildren and one great grandchild. He was preceded in death by his wife Dorothy, sisters Faye and LaPrael, and brothers Lee and Richard.

To send flowers to the family in memory of Jack Nielsen, please visit our flower store.
Send a Sympathy Card