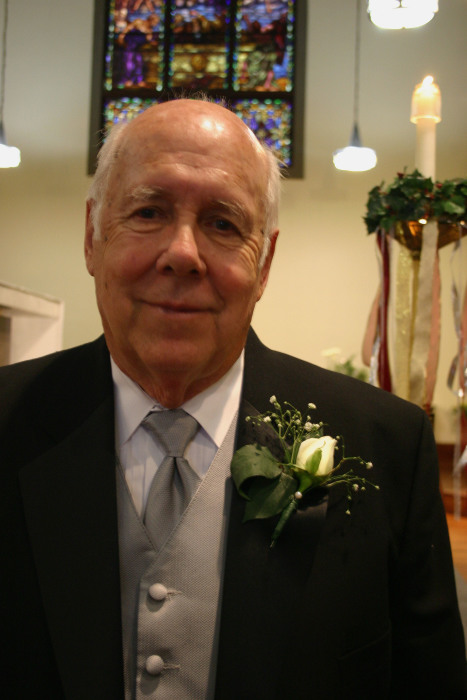 James Anthony Arndt, 90, of St. George, Utah, passed away peacefully with loving family by his side on April 23, 2018.  Jim formerly lived in Texarkana, TX and Fairfield, IA before relocating to Utah to live with his daughter two years ago.  A mass was held for Jim Sunday April 22 at the Saint George Utah Catholic Church.  A family memorial service will be held over Labor Day at the Fairfield Evergreen Cemetery.

Born February 8, 1928 in Brighton, Iowa, Jim was one of six children born to Anthony Joseph and Mary Genevieve (Millane) Arndt.  He graduated from Fairfield High School in 1945, went two years to St. Ambrose College in Davenport, IA, and graduated with a B.S.in Industrial Engineering from Iowa State University, Ames, IA in 1950.  Drafted into the US Army in 1950, Jim achieved the rank of Recon Sgt. of the 115th Engineering Combat Group. He served at Fort Leonard Wood MO, Fort Riley KS. , Fort Lewis WA, and Stuttgart, Germany before he was honorably discharged in 1952.

Jim was united in marriage to Agnes Teresa McInerney of Ottumwa, IA in 1953, and they settled in the Fairfield area, raising 6 children.  He was employed as an industrial engineer at Philco-Ford (Dexter Foundry, Inc.),  and  Plexco in Fairfield, IA, and later, Red River Army Depot/Arsenal in Texarkana, TX until his retirement.

Proud of his Catholic heritage, Jim was active in the church his entire life, becoming a Fourth Degree Knight of the Knights of Columbus. He was a member of the Veterans of Foreign Wars (VFW).  Every summer, he would load the family in their station wagon and travel across the U.S., imbuing a sense of adventure in his children.  He loved antique guns, and memorabilia related to the Civil War and Native American history and religion. His love of music was also instilled in all of his children.  He enjoyed bartering at flea markets and antique shops, and often said he could eat German apple cake for every meal of the day.  Most of all, he loved being surrounded by his family and friends.

In death, Jim rejoined his beloved wife Teresa; his son, Ronald; his parents; a twin brother Henry (who died at birth), and his brother, John.

We request no flowers or donations. Please simply take some time this week to remember and celebrate Dad with your family and friends.

To send flowers to the family in memory of James Anthony Arndt, please visit our flower store.
Send a Sympathy Card