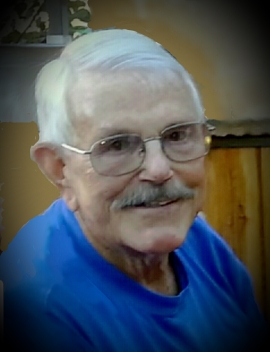 James is survived by his three daughters and their spouses- Cathy and Don Cann; Tracy and Dave Carter; Cheryl and Brent Waite. He is also survived by seven grandchildren; and nine great-grandchildren whom he loved dearly.

In Jim’s younger years, he lived in Council Bluffs, Iowa. His family then moved to El Monte, Ca. when Jim was 12 years old. Jim went to El Monte High School for 5 years. When Jim was around 37 years old, he went to Rio Hondo Community College to get his G.E.D. We were all very proud of Jim for doing this when he didn’t need to. Jim had served in the Navy during the Korean War. It was decades before we had learned that Jim’s ship, the USS Richard B Anderson, DD 786, should have been sunk. The only reason this did not happen was because the Captains of both Jim’s ship and the other ship that was with them had decided last minute to have the other ship go first, which had been attacked and sunk, instead of the original plan of dad’s ship going first. Dad had trained some of the men, from Korea, on the other ship. He felt a great sense of sadness losing his new friends whom he had worked closely with, loved, and had a deep respect for. Jim was a truck driver, usually hauling building materials to large construction sites. Every once in a while, on a lazy Saturday, he would take his family on a drive to show them where some of his deliveries had been. Back in the day, more often than not, those deliveries had taken place in remote, undeveloped areas, which are now metropolises.

Jim’s wife Shirley, and his three daughters, were members of The Church of Jesus Christ of Latter-day Saints, which Jim wanted no part of. But after three years of watching the good that it brought into Shirley and his daughter’s lives, he surprised them one Sunday morning by attending church with them. Soon after, he was baptized and was an active member whom many people looked up to. Though Jim had fallen away for a period, he never denied or talked badly about the church/gospel; Jesus; or our Heavenly Father. When Jim had decided to return to the gospel, he and Shirley had served for many years in the Redlands, Ca. Temple, and the Saint George, Ut. Temple, which he dearly loved being able to do.

Jim never worked out, but because of all of the physical work he had done being a truck driver, unloading his hauls manually, or preparing them to be lifted off mechanically, Jim was a barrel of a man. Seeing this strong and powerful body, you would have never guessed that Jim had an extremely tender heart when it came to animals. On more than one occasion, he would bring strays home that he would see on his hauls that were either stranded in the rain or seemed helpless. Jim wasn’t a big hunter, but every once in a while, he would go pheasant or dove hunting. The last time he went hunting, he shot down a dove, which was still alive when he got to it. With the dove looking into Jim’s eyes, he knew what he had to do. Jim looked up to Shirley with tears in his eyes and said, “I can’t do this anymore.” Jim and Shirley loved to dance, and they made a good team. On one occasion, they were at a church activity where there was dancing. They danced their hearts out. Jim especially felt the need to show off at just how good he and Shirley could dance. By the time the dance was close to the end, they had to rush out of the building and go straight to the car because Jim’s suit was literally falling apart. Luckily, the cultural hall that they had been dancing in had dim lighting.

You will be missed by all who were a part of your life.

Funeral services will be held at-

To send flowers to the family in memory of James Glenn Lee Baker, please visit our flower store.
Send a Sympathy Card