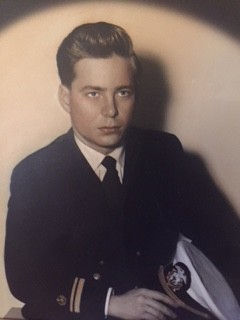 He was one of 9 children born to Theodore Thoephilus and Eula Busby Brady. A soon as he graduated high school he joined the Merchant Marines and sailed around  the world. When he returned to Hamlin he married Lovena Fay Kite on February 14th, 1950. He started working for El Paso Natural Gas Company as an operator in Dumas Texas. They had their first child Belinda in 1951. They moved to various towns in Texas having a son Gary in Kermit. When a job came up in Ganado Arizona at a pumping station on the Navajo Indian Reservation they moved there. From there they lived in Utah and Wyoming.  Lovena passed away in 1978, so Jim retired from Northwest Pipeline and moved to Salt Lake City. He became a real estate agent and broker. He loved golf, tennis, fishing, boating, hunting and being in the outdoors. He lived life to the fullest always taking advantage of any opportunity that came his way to have a good time. He was the last surviving child of Theordore and Eula Brady. He is survived by his daughter Belinda Akes (Richard). Grandchildren Jennifer McClintic (Michael), Deanna Plank (Erik) Rhianna Farmer (Brian) and great-grandchildren, Ethan, Adyson, Brady, Eva, Katie, Kali and Colton. Brother-in-law Alton (Wanda)Kite, sister-in-Law, Mary Brady, brother-in-law Paul Bush and many nieces and nephews.  A memorial service will be held in Texas in April 2018.

To send flowers to the family in memory of James Lee Brady, please visit our flower store.
Send a Sympathy Card