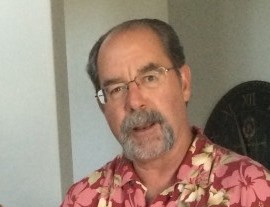 James Michael Griffing (Griff), 66, passed away on Wednesday, October 24, 2018.  He was born on September 4, 1952 in Bethesda, Maryland at the National Naval Medical Center to Lenore Fern Schroeder and Preston Blackburn Griffing, Jr.  He was married to Vickie L Griffing on August 8, 2008 in Millcreek Canyon, Utah.

Jim was born into a Military family and therefore grew up all over the world.  He graduated from Chofu Dependents High School in Tokyo, Japan in 1970 and returned to California to attend California State Polytechnic University graduating with a BS degree in Industrial Engineering.  He was awarded a full scholarship to the University of Southern California where he graduated with a Master’s Degree in Business Administration in 1976.  He went on to work for Interconics as the director of finance and administration, BMC Industries as the director of corporate policy and development, WED (Disney) Enterprises as Senior Finance Manager, and at Storage Tek in many capacities.  He was the Executive Vice President of Worldwide Field Operations and was later promoted to President and General Manager of Storage Tek Canada.  He was a member of the Young Presidents Organization which is reserved for those achieving the status of President of a corporation before turning 40 years of age.  Jim owned a Sears Roebuck franchise in Steamboat Springs, CO for approximately 10 years.  After selling the franchise he chose to retire.  He sold his home in Colorado and bought a home in Flagstaff, Arizona.

Jim worked a few part time jobs after retiring, hoping to avoid the long hours and stress of the corporate world.  He worked for Safeway in Flagstaff, AZ as a meat cutter, for Harmon’s Grocery store in Midvale, UT, and for Intermountain Healthcare in St. George, UT.  He began having severe heart problems in 2017 and spent 1 ½ years in and out of the hospital having 5 heart surgeries before passing away in his sleep from heart failure.

Jim’s greatest love in his younger days was baseball.  He enjoyed hunting, rock climbing, fishing, skiing, scuba diving and sailing.  He loved the outdoor life and told many stories about his hunting adventures with his best friend, Joe Beale.  Jim also told many stories of growing up in the military and was very proud of his father’s accomplishments.  He climbed Mt. Fuji with his father while living in Japan.

Jim is survived by his wife, Vickie, his father, Preston, his son, Alex and his daughter Allison.  He was preceded in death by his mother, Lenore, his brother, Ronald and his sister, Cindy.

Jim requested that he be cremated and his ashes spread at Lake Powell.

So long my love, until we meet again.

To send flowers to the family in memory of James Michael Griffing (Griff), please visit our flower store.
Send a Sympathy Card