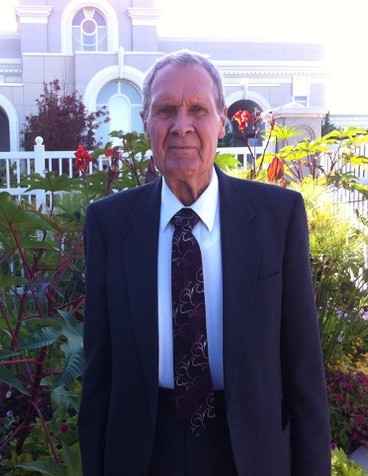 James Lamar Knudsen passed away peacefully at home on Monday, May 4, 2020. He was born on March 28, 1937 in Mesa, Arizona. The third of eight
children, Jim spent his childhood in Mesa and later in Farmington, New Mexico. He served as a missionary in Sydney, Australia, where he met and later married Diann Small.
Together they had five children.

After Jim graduated from Palmer College of Chiropractic, he practiced as a chiropractor in Riverside, California; Penrith, Australia;
and Clovis, California. He loved his profession and patients and helped many people throughout his long career.

Jim had a great love of music and sang in a barbershop quartet for many years. He was a faithful member of the Church of Jesus Christ of Latter-day Saints and served in many
Church positions, including as a bishop and high councilman.

Jim and his second wife, Leslie Wood, were married for 26 years, and he became a loving stepfather to Leslie’s four children. Jim and Leslie shared 25 grandchildren and 17
great-grandchildren.

Jim is survived by his wife, Leslie; his children, Melissa McQuarrie (Scott), Todd Knudsen (Kristi), Shellie Payne (David), Shannon Hoogenbosch (Tad), and Charlotte
Levy (David); and his stepchildren, Linda Klawiter (Russ), Brent Wood (Sherry), and Damon Wood (Michelle). He was preceded in death by his parents; his brothers, Arnold
and David; and his stepson, Michael Wood.

To send flowers to the family in memory of James Lamar Knudsen, please visit our flower store.
Send a Sympathy Card