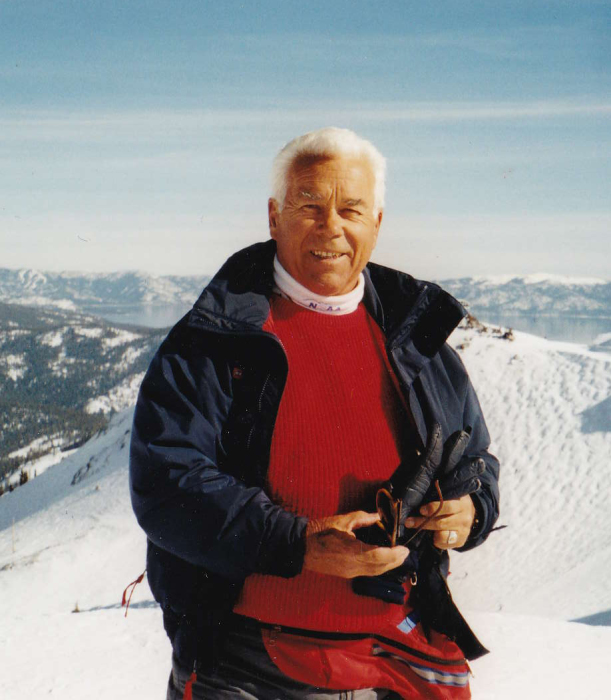 Jay Edwin Price was born in Payson, Utah on December 25, 1931 to James Willard and Zenola Bereneice Price. His early childhood was spent in Pioche, Nevada until he moved to Eureka, Utah to live with relatives when his parents divorced. His mother eventually remarried, bringing him to Provo, Utah where he discovered what became his lifelong passion: skiing. He would later say that he realized early on that skiing was an expensive sport, so he’d either have to make a lot of money at a job or work in the ski business.

At 17, Jay graduated from Provo High School and joined the Navy. This took him across the country to New Jersey where he met and married his first wife, Joan Reed, and together they had three daughters. Upon leaving the Navy, he and his family moved back to Provo where he attended and graduated from BYU. His love for skiing took him to a small ski resort in the Provo canyon called Timp Haven (now Sundance). There, he directed the ski school and started the first busing program (SCERA Ski Program) to bring school aged children to the slopes to learn the sport he loved.

In 1965, Jay was given the opportunity to move to Truckee, California to help build a brand new ski resort, Boreal Ridge on Donner Summit, from the ground up. During his more than 20 years as General Manager of Boreal, he implemented the Alpine Junior Skiers Program for children, the Winterset Ski Program for women, and the California Ski Teachers Clinics (CSTC). He was also the first to bring night skiing and snow making to Northern California! Jay served as the National Ski Areas Association president for many years and was also a founder of the Sierra Ski Areas Association in 1969. He was regarded as a legend in the ski industry and had many friends in that community with whom he remained close until the end of his life. During this time, Jay and his first wife divorced and he remarried twice; first to Louise Katzenbach and finally to Paula Stahl.

He loved to travel and never shied away from adventure, including skydiving with his daughter, Judy, salmon fishing in the Yukon, or spending weeks on a deserted island with a friend. His youngest daughter, Jane, said that all the adventures she’d had in her life were because of him. He took her helicopter skiing, white water rafting, to Club 33 at Disneyland, and even to a Playboy resort. Jay would meet strangers on his trips, but keep them as friends forever. Recently, in a discussion about “bucket lists,” he remarked that he no longer had one; he had gone all of the places he’d wanted to, and done everything he had dreamed of and more.

Jay had many “quotes” and claimed they were words to live by. His daughter, Janet, who worked at Boreal with him for many years, recalls him saying, “Remember the golden rule, the man with the gold makes the rules” and, “I may not always be right, but I’m always the boss.”  Other coworkers were told, “If it was easy, anybody could do it,” and an all-time favorite was, “I come up with the big ideas and you work out the details!” We will all miss his wisdom, wit, and advice.

After retiring from Boreal, Jay made his home at Donner Lake in northern California, enjoying the scenic beauty of the summers. However, when October brought colder weather he would head to his winter home in the desert of Canebrake in southern California, outside of San Diego. His community of friends there enjoyed his “sermons” at Mission Santa Margarita. Aside from his titles as father, grandfather, uncle, and friend, Jay gave himself other titles such as Czar and Count! He mastered the art of storytelling and loved to regale people with tales of his adventures and travels, embellishing them as he went. After hearing of his death, the Canebrake residents flew their flags at half-staff in his honor.

Jay passed away suddenly due to complications from his 4 year long battle with laryngeal cancer at Dixie Regional Hospital in St. George, Utah with family at his side at age 88. He was the patriarch of the family, survived by his daughters Janet Brown (Doug) of Texas, Judy Pollock (Gale, deceased) of California, and Jane Connor (Chris) of New Jersey; his grandchildren Bradley and Jennifer Pollock, and Shane, Cameron, and Brendan Connor; and numerous nieces and nephews. It was Jay’s wish that no services be held in his honor, however he did love a good party! Please remember him in the way that seems most appropriate to you and the individual relationship you shared with him.

To send flowers to the family in memory of Jay Edwin Price, please visit our flower store.
Send a Sympathy Card