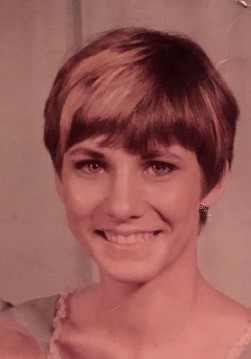 On April 16,2022 the world lost a kind and gentle soul. Jeanne’s valiant fight with pancreatic cancer ended at home surround by loving family. We will miss her bright smile and her big heart.

Our beloved mother, grandmother, great grandmother, sister, cousin and friend Jeanne Yuhas Bullock was born December 4, 1950 in Midvale, UT to Joseph and Betty Yuhas. Jeanne grew up in the middle of two brothers, Bruce and John. Being the only girl, she was a real sparkle in her parents’ eyes. She attended Hillcrest High School where she was a member of the drill team and choir. She was a very talented pianist.

On March 30,1968 Jeanne married the love of her life Ronald Lee Bullock. They had four beautiful children. She worked in the airline industry for Western, Eastern and Continental.

After Ron passed away in 1994, she changed career paths and became a building inspector and what an inspector she was! Jeanne’s Hungarian blood ran deep. She was a strong willed and often stubborn as she helped forge the path for women in the industry. Everything she did was with a heart of gold and pure integrity.

She moved to St. George with her father Joe, who had lived with her since Ron’s passing. She continued her career as a building inspector at St. George City and Washington City gaining many friendships along the way. A month after her retirement she was diagnosed with pancreatic cancer. She took the bull by the horns and fought one hell of a fight for almost 7 years!

Jeanne’s greatest joy was her grandchildren and great grandchildren. She cherished every moment; whether it was attending their events or laughing over face time with them. She was intimately involved with every aspect of their lives, and making each of them feel very special and loved.

Jeanne was an avid sports fan, often scouting the opposing teams and always cheering on her “kids”. She was a loyal Utes fan and rarely missed a game. She loved drinking 7-up and serving in her many church callings. She had a deep and unwavering love for Christ; and always tried to make her little part of the world better. One of her favorite phrases was. “Just keep swimming!”

Jeanne is survived by her children Jason (Kellie), Jeremy (Heidi), Jesse (Ethel), and Jenny (Andy), many    grandkids, and great grand kids, brother Bruce Yuhas (Karla). She is proceeded in death by her husband Ron, parents Joe and Betty and her brother John.

She requested two celebrations of life, one in St. George on Saturday, April 30th at 11:00 a.m. at ward house located at 1222 East Brigham Rd. in St. George. The other one will take place on Saturday July 16th in Midvale UT. Details to follow

To send flowers to the family in memory of Jeanne Bullock, please visit our flower store.
Send a Sympathy Card