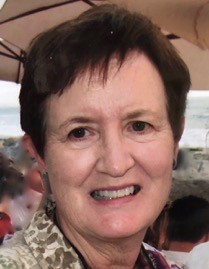 JOAN SHIREMAN
May 28, 1944 - April 2, 2020
Joan Shireman died April 2, 2020, at her home in St. George, Utah, at the
age of 75, from natural causes.
The daughter of Henry and Jane (Hall) Sheppard, Joan Carolyn Sheppard
was born in Burbank, California. The family moved from the San Fernando
Valley to Vista, California, when she was in the third grade. She graduated
from Vista High School in 1962. She married Neil Shireman in 1965. Joan
was the first member of her family to graduate from college. Her double
major at Long Beach State University was Art & Sociology. She was a
gifted artist in multiple media including woodcuts, stained glass, and
photography, especially black & white portraits. She became a teacher, first
in the Watts district of Los Angeles, then Porterville, then Oceanside,
California. For most of her career she taught kindergarten. In 1981, she
became a mom to David. In 2004, Joan, Neil, and David moved from
California to Utah.
Joan was a two-time breast cancer survivor, including a Stage 4 diagnosis
in the 1980s. She loved travel, especially to Scotland. She was a loyal and
loving wife, mother, daughter, sister, and friend. Her sense of humor was
sometimes sardonic, frequently self-deprecating, and always entertaining.
She was preceded in death by her parents. She is survived by her husband
of 54 years, Neil Shireman, by their son David Shireman, and by her
siblings Gordon Sheppard, Virginia Colop, and Robert Sheppard, and their
spouses and children.

To send flowers to the family in memory of Joan Shireman, please visit our flower store.
Send a Sympathy Card