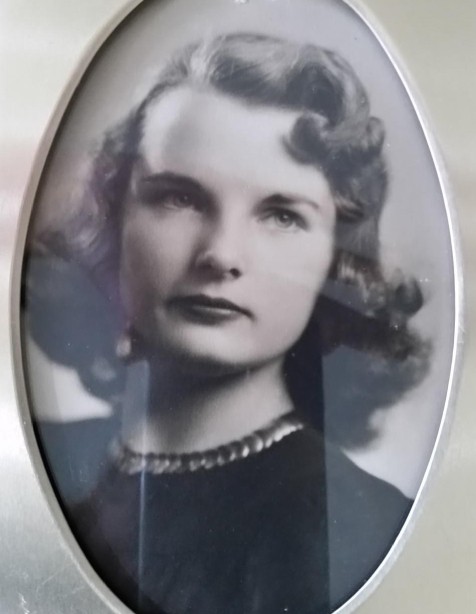 Joyce Callow Ostertag died at home on July 30, 2019 in St. George, Utah with her family at her side. She was born Oct. 21, 1923 in Bremerton, WA. on the Puget Sound. Her grandfather, William Callow, immigrated from the Isle of Man in the late 1800's and had settled in what was then Charleston, now Bremerton, WA. He was active in city politics and Callow street is named after him.
Joyce grew up in the beautiful Puget Sound area with her brother and 2 sisters, swam and fished off the Illahee dock, and was never far from the water. She received her BA degree from the University of WA, met and married Carl Ostertag, a dashing ensign and graduate of the U.S. Naval Academy. They had 6 children and re-located many times throughout the U.S over the course of their marriage and Carl's Naval career. She made a beautiful and loving home in every place they lived.  She taught her children to follow their heart.
She is preceded in death by her father, Wallace Grafton Callow, her mother, Violet Anderson Callow, her sister, Jean Callow Ennis and her brother Wallace Callow.
She is survived by her sister, Bettymae Callow Sonnenburg, her 6 children: Carl Ostertag, Ed Ostertag, Susan Wright, Janet LaCaille, Meg Busse, Cathy Gibbons, her 11 grandchildren and 14 great grandchildren.
After her kids were grown, Joyce began a career in banking at a bank in Beverly Hills, CA and achieved Assistant Vice President position before retiring in 1989. She embarked on many cruises and travels to all parts of the world and always had a camera in her hand. She took just as many photos of flowers as she did of cathedrals, and they adorned her walls, next to photos of her grandchildren.
She was a member of the Presbyterian Church in North Hollywood, CA and later, Thousand Oaks, CA, and served as a deacon. She also ran the nursery every Sunday. Her faith was abiding. She spread joy, grace, and compassion. She was a docent at the Reagan Presidential Library in Simi, CA and led tours. She was an avid bridge player and a budding oil painter.
She passed along her love for language, her appreciation for sunsets, her slower pace, bare feet on the lawn. Children loved her. She sat on the floor with them. She was quick to hug and to praise. She gave them the right to go slow, to see more. Her smile was sweet and it lasted.

To send flowers to the family in memory of Joyce Callow Ostertag, please visit our flower store.
Send a Sympathy Card