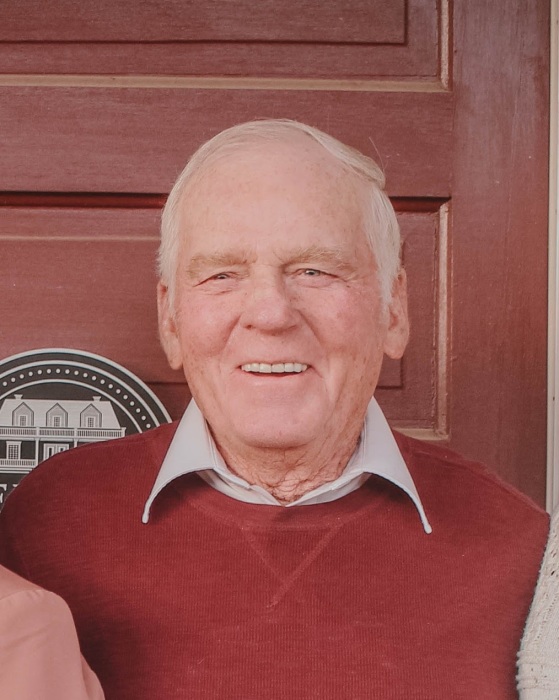 Red grew up in St. George attending school and working at the family business, Blake’s Coal and Steel.  He also worked for Cline Adams doing whatever task  he had for him.  Red joined the National Guard in 1957 and was part of Unit B Battery 222 Field Artillery.

Red met Patricia (Pat) Campbell in August of 1957 and married her three months later, in December. They were sealed in the St. George LDS Temple on October 19, 2013. Red and Pat moved to Las Vegas in 1962 to further Red’s career in painting cars at Pete Findlay Oldsmobile.  Red learned his skill by watching and doing. Red was highly respected and sought out for his auto body repair and paint skills. He always said, “You can’t have a good paint job without a smooth body”.  Red painted many car show cars that received first place.  He painted cars for race car drivers, such as Big Daddy Don Garlett, Shirley Muldowney, and Ken Black “Summit Racing”. Red also painted a car and plane for Elvis Presley. In 1971, Red and Pat moved back to St. George where Red continued his career and started a new venture in towing.  Red was one of the first towing companies in St. George and one of the first of four flatbed wreckers in the state of Utah.  Pat always had his clothes laid out for late night wrecker calls and he was 10-17 within minutes. Red worked at Howard’s Auto Body then with Warren Hanning doing construction.  He then partnered with his long time friend, Clark Fuller at Superior Auto Body in 1975. In 1980, Red and Pat opened Blake’s Auto Body; in 1987,  they opened Blake’s Auto Recycling & Salvage, the first recycling facility in St. George.

Red enjoyed working and taught his posterity to always work hard. Red enjoyed taking his family to Disneyland every summer and staying at the campground right by the park.  Great times were also enjoyed at Mount Charleston, Magic Mountain, Wax Museum, Sea World, Drag Races, Lake Powell, Car Shows, Knotts Berry Farm, Sand Dunes, and trips to Pontiac, Illinois. He loved a good joke and loved to tease you a little, especially during a card game.  Red loved being surrounded by family and friends and enjoyed many vacations with them to various locations such as DisneyWorld and Hawaii.  Red loved going to the Drag Races in Las Vegas and was an avid Force Family Fan. Red and Pat enjoyed listening to the Eagles. Red also had some favorite songs; Bad to the Bone and Dirty Laundry which could be heard throughout the body shop. Red learned and was taught from the school of hard knocks.  He was a very smart man who was frugal, straight forward, a little rough on the exterior, but a softy on the inside.

Red was a member of the Bloomington Hills 1st ward and had a great love of the Lord and his 1st ward family.

Our Dad taught us, his children, many attributes that have carried through into our posterity. Red had many special friends and people in his life that he will forever treasure for their love, patience, dedication, tenacity, and most of all, their listening ear.  Red’s children and family would like to thank family, friends, and church family for their help, support, and friendship.

Arrangements are made under the direction of Hughes Mortuary. Interment will be at the St. George City Cemetery. Friends and family are invited to sign Red’s guestbook at www.hughesmortuary.com.

To send flowers to the family in memory of Kenneth "Red" Gary Blake, please visit our flower store.
Send a Sympathy Card