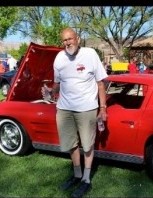 Ken was raised in Murray, UT. He went to Murray High School. He moved to Sandy, UT after he married Diana. He served a life-long and passionate career at Kennecott Copper as a Locomotive Engineer until his retirement in 1995. He founded Concrete Gardens Statuary in 1992, which he ran successfully until retiring and selling the business in 2007. After retiring, he moved to Hurricane, UT with Diana. He loved driving his three Corvette’s and was a member of the Corvette Club of Utah. His other passions included- car shows, working on his yard, and birds. He worked for Walmart for 8 years, and the family would like to thank his Walmart family for their kindness and help throughout those years.

At his request, there will be no funeral and a family arrangement will be announced at a later date.   Arrangements are made under the direction of Hughes Mortuary, 1037 E 700 S St. George, UT, 435-674-5000 In lieu of flowers the family asks for donations to the American Cancer Society.

To send flowers to the family in memory of Kenneth Floyd Rice Jr., please visit our flower store.
Send a Sympathy Card