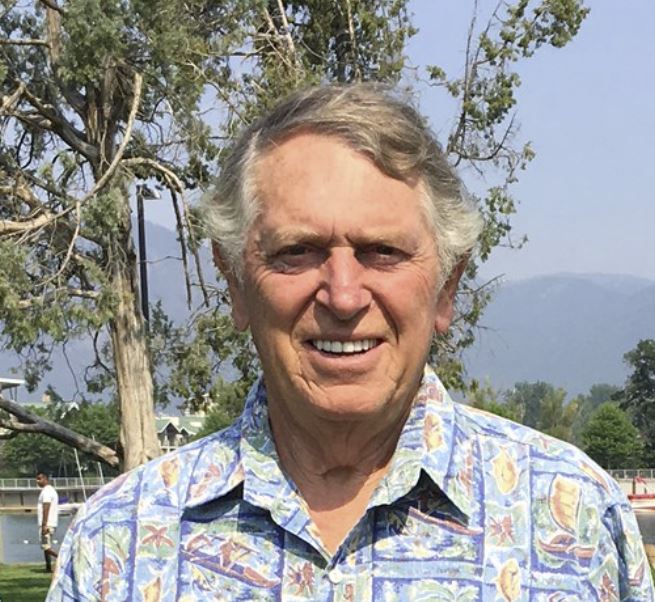 Kim had an adventurous spirit, loved to learn, read, test his skills and help others. He was an Eagle Scout and a flag-bearer at the grand opening of Disney Land, met many movie stars and Walt Disney. He graduated from Muskingum College (now University) in New Concord, Ohio. Having earlier earned his pilot’s license, he flew to job interviews. For a time, taught public school science and chaired the department; owned and operated two gas-service stations; managed the garden department of a Montgomery Ward store and built houses. Kim enjoyed boats, cars, hunting wild game and ducks. He owned and operated a bed and breakfast on Put-in-Bay, Ohio on Lake Erie and loved to teach his kids to water ski. Kim worked as a quality-control manager for Ford Motor Company in Detroit, Michigan and at the Wixom Truck plant. He and his friend Art flew around looking for a near-water community in which to settle their families. They flew over Coeur d’Alene, Idaho, landed and found it perfect. Kim gave up his Ford job. The friends promptly moved their families.

Kim started Riley & Ritter Construction Company, LTD in Coeur d’Alene and maintained that commercial and residential business for 30 years until he sold it and retired. He wintered in La Paz, Mexico on the Baja for a decade and learned to prepare authentic Mexican food. In retirement, he and Caroll trained as Stephen Minister caregivers, were active in the Methodist church as Kim had been in the Coeur d’Alene Presbyterian church. He served as chair of SHUMC trustees and worked on Mission projects, building and restoring homes for the less fortunate in Mexico, Alaska, Bahamas, Saipan and Native American Reservations. He headed a team that built a bridge behind the church to the fire circle from the Memory Garden, where his ashes will be interred near friends who have passed in recent years.

He built a colorful neighborhood lending library and loved to buy books to stock it and watch families borrow and leave. During Covid lockdown, Kim built a camper from scrap wood and glass. Wherever we camped it was a conversation piece that brought new friends.

Kim was a gallon plus blood donor for the Red Cross, bought Bibles and gave them generously to those he hoped to lead to the Lord. Kim walked his talk and finished well.

He is survived by his beloved children: Jeff Riley of Pittsburgh, PA; Jamie Riley of Girard, OH; Bryon Riley of Seattle, WA and Matt Riley of OH; grandsons Christian Riley and Damon Jordan-Riley; former wives: Jeanie, Brenda and Martha. He will also be missed by his stepchildren: Kimbra, Sean, Kimberly and Michelle, their spouses and six grandchildren. Kim was preceded in death by his biological parents and step-father Mr. Riley.

Memorial funeral services will be held at Shepherd of the Hills United Methodist Church on a date to be announced. Hughes Mortuary, 1037 East 700 South in St George, UT, hosts

Kim Riley’s obituary on their website (www.hughesmortuary.com) and will assist in final arrangements.

To send flowers to the family in memory of Kim Brenner Riley, please visit our flower store.
Send a Sympathy Card