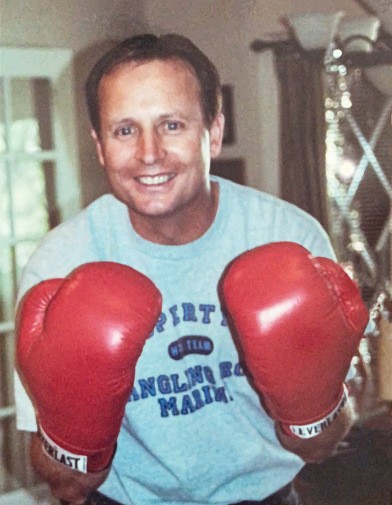 Kit was the middle child of nine children, and as a product of such, was a peacemaker and very independent. He was  raised in Ogden, Utah, until moving to St. George as a young teenager. He was ambitious at a young age and his newspaper route was the first of many business ventures. He was described as being adventurous, happy-go-lucky and always on the go.

Kit attended Dixie High School, where he was well liked and had many friends, who nicknamed him "Sly" because he was both handsome and shy. During his senior year of high school, he attended a dance where two of his friends were arguing over who got to ask Valerie to dance. While they were arguing, Kit, "Sly '' slipped by and asked her first. Val knew from that very first dance that he was her soulmate. Three years later,  they were married and four years to the date after that, they were sealed for time and all eternity in the St. George Utah Temple of the Church of Jesus Christ of Latter-day Saints. Their love and devotion to each other was an example to all their children and those who knew them. They made marriage look easy.

Throughout high school, he worked as an auto mechanic and salesman. At just 23 yrs old, he and Val bought their first gas and service station just off I-15 exit 10. They were just young and dumb enough to think if they worked hard they could do it, and they did. He was always a great provider for his family and taught his kids the value of hard work by having them scrub the drive, bag ice, and run the till. He owned several successful businesses over his lifetime and loved helping people who were down on their luck by giving them a job, a place to live, or both.

Kit  loved being outdoors and out on the lake with his family. Lake Powell was like a second home and some of he and his family's most treasured memories were spent there.

He was a faithful member of the Church of Jesus Christ of Latter-day Saints and served in many church callings, including Bishop, but his favorites always involved working with the youth. He never missed an opportunity to help out at girls camp and served as scoutmaster for many years.

He loved all sports, but his favorite was basketball. He stayed in shape playing church ball, and was a lifetime fan of the Utah Jazz. His signature loud clap could be heard throughout the entire house every time they made a great play.

He was a beloved father and always made each of his kids feel important by setting aside time to spend with each  of them. He never missed a game or a dance recital, and always pushed them to be their best. Kit was known for his great “Dad Jokes” and as his voice became harder to understand during his last few years, he would send jokes through text message to his teenage granddaughters, which was a big hit.

Kit had an unwavering testimony of his Savior, Jesus Christ. Throughout his seven years of suffering with ALS and even in his last minutes of life, he never stopped smiling. His “always look on the bright side” attitude, and his incredible strength and perseverance during adversity were an inspiration to all.

The family would like to thank the many friends and caregivers who helped care for him over the last several years. You were like family to him. Thank you.

Funeral services will be held June 3rd at 11:30am with a viewing from 9-11 a.m. at The Boulder Ridge stake center, 1762 S River Road, St George, UT. Interment will take place at the Tonaquint Cemetery.

To send flowers to the family in memory of Kit Charles Vowles, please visit our flower store.
Send a Sympathy Card