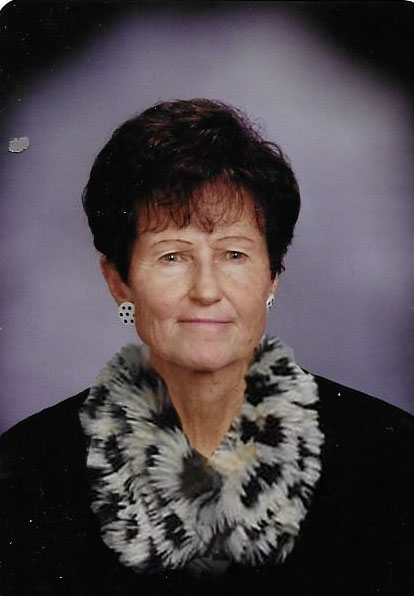 LaRene Grange Rammell, age 83, was called home to her Heavenly Father on December 24, 2017. She passed from this life from natural causes incident to age at her home in Saint George, Utah, to meet her beloved husband, Ora Jay, who preceded her in death twenty-four years earlier.

LaRene was born on June 26, 1934, in Huntington, Utah, to parents Ralph S. Grange and Myrl Johnson Grange.  She was the seventh child of twelve children and recalls many fond memories of hard work on the farm in rural eastern Utah.  LaRene had a beautiful singing voice and was involved in many choirs throughout her life.  Her voice was also heard as she participated on the debate team in high school and throughout her life as she always wanted the last word, especially regarding her political and religious views. She graduated from Brigham Young University with a bachelor’s degree in home economics and began teaching home economics to high school students on the Blackfeet Indian Reservation in Montana.

While teaching in Montana, she met the love of her life, Ora Jay Rammell, whom she married in the Manti LDS Temple on July 18, 1958. They started their family right away and would be the parents of seven children whom they raised in many different areas of the country.

LaRene worked alongside her husband in several medical clinics as an allergy consultant where she educated patients on nutrition and diet to help them with their allergy treatments. She retired from working in the medical field at age 77 and was ever grateful to Dr. Robert Milne for allowing her to continue to work doing what she loved even as her health and vision declined with her advancing age.

LaRene was a devout member of the Church of Jesus Christ of Latter-day Saints and continued to give weekly service in the Saint George Temple up until her passing.  She served in many capacities in ward and stake callings and was thankful  for all of the friendships she made with members of her children’s wards when she was living with them in Las Vegas, Nevada; Saint George and American Fork, Utah; Bulverde, Texas; and Canyon Country, California.

LaRene will be remembered for dedication to her family in teaching them, by example, consistency in striving to live the principles of the Gospel of Jesus Christ and continual service and sacrifice despite physical challenges and disability.

She was preceded in death by her husband, Ora Jay Rammell; her son Phelon Scott; her sister Kathryn (Donald) Rahn and brother Ferris (Mary)Grange.

In lieu of flowers, please donate to the National Federation of the Blind

To send flowers to the family in memory of LaRene Rammell, please visit our flower store.
Send a Sympathy Card