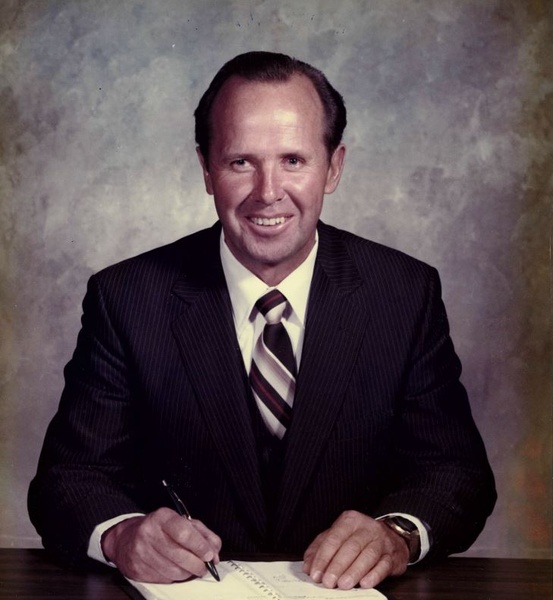 Panguitch, Utah – Laurel LeRoy Holman passed away January 5, 2022. He was born August 22, 1934 in Delta, Utah to Vernon LeRoy and Arvilla Marie Boothe Holman. He was the second of 4 children. He married Wenda Louise Sandin on May 28th, 1954 in the Logan Utah LDS Temple.

As a young boy, Dad enjoyed working and playing with several Boothe family aunts, uncles, and cousins on the Boothe farm in Delta, UT. At age 11, he and his family moved to Panguitch, Utah. Dad was very athletic and excelled at running track and playing baseball and basketball. He served as the PHS Student Body President in 1952, but he may have been most interested in a dark haired, Indian girl named Louise.

After high school, Dad attended Utah State University. In January 1954, Dad enlisted in the United States Air Force and served during the Korean War as a radar mechanic. One spring weekend, while Dad was stationed at Lowery Air Force Base in Denver, Colorado, he and a friend drove from Colorado to Logan, UT so that he could marry his high school sweetheart, Louise Sandin, in the Logan Temple. As soon as Louise finished nursing school, she moved with him to Elmendorf Air Force Base in Anchorage, AK where he was stationed. Dad served as a branch missionary in the Northwestern States Mission during the time he was stationed in Alaska.

Dad graduated from Brigham Young University with a Bachelor's Degree in Accounting. He and Mom made their home in Bountiful, UT and he began working for the IRS. In 1967, with 4 children, Rick, Laurie, Machelle and Kelly, mom and dad moved back to Panguitch into the home in which his parents had been living. A few years later, Sue was born. Dad took over the local American Oil Distributorship from his father, Vernon Holman. He enjoyed delivering oil and gas products to many people in Piute and Garfield Counties. Later, he became the Business Administrator of the Garfield County School District. He remained employed with the school district until his retirement.

The gospel of Jesus Christ has always been very important to our dad. He and mom have taught their children and grandchildren about the gospel through their love and through their examples. Dad served faithfully in many callings: Bishop of the Panguitch South Ward; Panguitch Utah Stake President; Missionary with Louise in the Switzerland, Zurich Mission; and, the first President of the Albania, Tirana Mission. During a time of political upheaval in Albania, Dad courageously oversaw the evacuation of all of his missionaries. Later he and Mom returned with some of his missionaries and continued the work he was called to do. Dad and Mom served as ordinance workers in the St. George Temple from 2000-2013. Dad served as a Sealer for many of those years. Dad was a wonderful home teacher and served many years with his neighbor, Grant Houston.

Our dad loved his family very much and loved spending time with Mom, his children, and his grandchildren. He attended many track meets and ballgames. He may have been known for expressing his thoughts to the officials a little bit! Some of dad's favorite activities with his family were going to Lake Powell, fishing, hunting, riding and taking care of his horses.

He enjoyed spending time working at his farm north of Panguitch; fondly called “the piddle farm” by his family. He also enjoyed helping at Lynn and Laurie’s ranch in Circleville and helping build his cabin at Panguitch Lake.