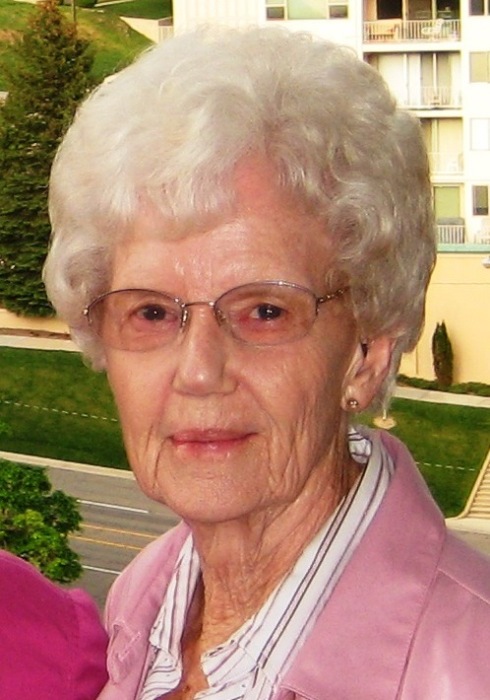 Lillie Margaret Foster Lang Parker Williams age 93, passed away peacefully on March 6th, 2017 at her home in Hurricane, Utah.  She is the daughter of Joseph D. and Theresa Knell Foster of Cedar City, Utah. She was born on October 3rd, 1923 in Cedar City, Utah.  She was preceded in death by her parents, and siblings, Keith, Clift, Howard, Grace and Charles Eldred Foster.

The family lived on a farm about six miles west of Cedar where they commuted to school by bus to Cedar City until Lillie was in junior high and her folks moved the family to Cedar City where Lillie finished her schooling, attending high school and two years of collage at the BAC (Branch Agriculture College) now known as Southern Utah University. After moving to California she took some courses in banking.

She married Golden Lang, May 16th, 1943, and later solemnized the marriage in the St. George Temple on September 20, 1944.  Golden left home with the National Guard for service in the Army in 1941, he later transferred to the Air Force where he became a pilot on the B-24 Liberator Bombers and served in the European theater. He completed his 30 missions and returned to the states where he was sent to Tennessee as an instructor on the B-29 Bombers. Golden was killed in a head on collision with another plane on April 26th, 1945. Golden and Lillie had one daughter Margaret Jean Lang Bringhurst who was one year old at the time of her father’s death.

Lillie and Margaret returned to Cedar City, Utah living with her parents (who had moved back to the farm), for a time. Lillie worked for Southern Utah Power Company as a receptionist for about a year, and then in 1946 she went to work for the Bank of Southern Utah. She worked as a teller and a bookkeeper until 1953.

Lillie later met and married Leo Ray Parker on December 1st, 1948. Ray had also been in the service, joining the Navy in 1941. After his time in the service, Ray went to the College of Southern Utah and Graduated with a Bachelor’s Degree in Education. In 1953 Lillie and Ray decided to move to Southern California where Ray became a school teacher for a few years. There in California their son Don Ray Parker was born on December 16th, 1954. Lillie went to work for North American Aviation as a secretary for a few years until they decided to move to Northern California, where they bought a house in San Mateo. Ray went to work for Pan American Airways in 1958, and Lillie worked for Bank of America and Wells Fargo before transferring to West Coast Federal Savings and Loan in 1961.

Lillie worked herself up from a teller to manager of the savings department, and the last few years as a manager of retirement programs with a title of Assistant Vice President. Lillie retired after twenty years with the Savings and Loan in 1981. Ray retired from Pan Am in 1980. They decided to move back to Southern Utah where they bought a house in Hurricane, Utah.  She worked a few years in the La Verkin Branch of the Bank of Southern Utah, until they were taken over by First Security Bank.

Lillie held numerous positions in the LDS Church, Sunday School, Primary, Young Women teacher as well as Stake Young Women Leader, and many years as a ward Librarian. She worked as an ordinance worker with Ray in the St. George Temple and continued working there even after his death in 1997. She loved being in the Temple and the association with the other workers.

She considered herself blessed to have the support and love of so many good friends and neighbors in Hurricane. Lillie loved singing in the chorus at school, community and church choirs. She loved to dance and had married some very good dancers, Ray and Lillie did quite a bit of traveling while he worked for Pan American Airways, going to several countries, England, France, Germany, Japan, Guatemala, Hong Kong,  Bangkok China and Switzerland.

Ray passed away after 49 years of marriage on April 28th, 1997. Lillie later married Gordon Williams from Cedar City, in August of 2001 and they worked together in the St. George Temple for a few years. She gained a whole new wonderful family, daughter Carol Ann Williams (deceased), son Roger and his wife Barbara Williams and their family, daughter Brenda and her husband Dale Roundy and their families. Gordon and Lillie  lived in Hurricane most of their marriage, spending some time in Cedar City until he sold his home there.

Funeral Services will be held on Saturday, March 11th at the LDS Church located at 1178 S. 700 W., Hurricane, Utah 84737. Visitation will begin at 9:30-10:45am followed by the funeral service at 11:00am. Burial will be at the Cedar City Cemetery, Cedar City, Utah at 1:30pm. All services are under the direction of Hughes Mortuary, St. George Utah.

To send flowers to the family in memory of Lillie Margaret Williams, please visit our flower store.
Send a Sympathy Card