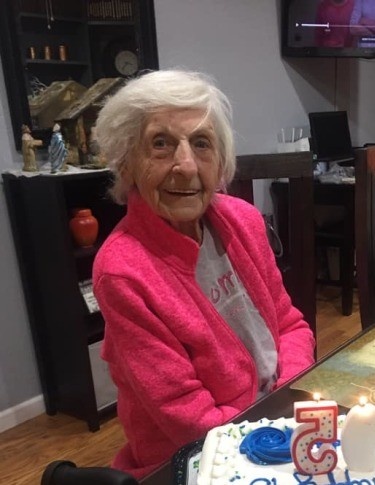 She was raised in Ogden Utah, where she graduated from Ogden High School. She met Jim in Brigham City where he was recovering from injuries suffered in WWII. They lived in Ogden for many years, in 1971 they moved to Hollywood Florida for a few years, then moved to Phoenix Arizona. They decided to move back to the Ogden area to be closer to family. She had a few jobs through the years but she was mostly a homemaker. She enjoyed doing crafts with Jim and her granddaughters. She enjoyed camping with the family. She and Jim went on multiple cruises and in 1963, she visited him in England where he was working. She moved to St. George in 2013 to live with her daughter Margie and her granddaughter Mary Ann. She enjoyed spending time with her grandkids going to baseball and football games and camping.

She is survived by her daughter Margie Ann Neely Chamness, her granddaughters, Mary Ann Steele and Trisha (Cory) Bennett, great grand children Michelle Steele and Nick (Tristan) Warmsley, Rayce Bennett and 4 great, great grandchildren James, Charlotte, Danielle and Anthony Waltman, her sister in law Marybelle East and many nieces and nephews. She was preceded in death by her parents, all of her siblings, her husband Jim Neely and her son Bart Neely.

It was her wish to be cremated. We will be planning a celebration of her life with family and friends in Ogden, sometime in August. We will update with date, time and place soon.

To send flowers to the family in memory of Margaret Elizabeth Neely, please visit our flower store.
Send a Sympathy Card