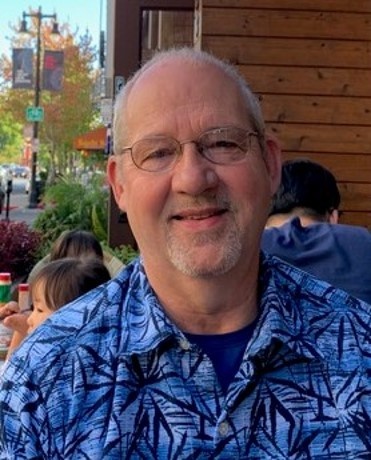 St. George, Utah -- Mark Whitney Licher, 71, passed away in his home on Wednesday, June 10 th ,
following a short illness. He was born in Long Island, NY, to parents Helen (Diener) and James Licher.
Mark grew up in Geneva, Illinois, where he attended local public schools and the Elgin Academy. He was
active in sports and theater. He was a good big brother to his little brother and sister, protecting and
teasing in equal measure. He went to broadcasting school to be a disc jockey, but the army had
different plans for him and in 1970 he was drafted. He spent the next year and a half running a bakery
in Chu Lai, Vietnam. He was very proud of his military service. Sadly, the lung cancer that took his life
was most likely caused by exposure to Agent Orange defoliant during his service in Vietnam.
On his return he worked in the kitchen business for St. Charles Kitchens and raised a family, coaching
little league and soccer, being a scout leader, and being very involved in his children’s activities and
schooling. He later moved to Cedar Rapids, Iowa, where he continued to design kitchens, with some of
his award-winning designs appearing in Better Homes and Gardens Magazine.
In 1997 he met the love of his life, Susie, and they married in 1999 on a Royal Caribbean Cruise in St.
Thomas, VI. They spent the next few years in Cedar Rapids, continuing to raise five children between
them. In 2015 they retired to St. George, Utah, where they have fully enjoyed everything the area has
to offer – beautiful scenery, hiking, biking, camping, and visiting the area’s state and national parks.
Mark never met a baby or child he didn’t like. After he retired he volunteered daily at local grade
schools – Erskine Elementary in Cedar Rapids, Iowa, and then Panorama Elementary in St. George.
Whether it was helping a struggling child or cheering on a successful one, he delighted in every
interaction. He was a good listener, attentive teacher, and wonderful role model to every child he
mentored.
Mark was also an animal lover and devoted dad to several rescue dogs over the years. He gave of his
free time to work at food pantries and soup kitchens, as well as community activities to support the
homeless and during times of disaster and hardship. He was supportive, kind, and giving to his friends,
and loving and devoted to his family. He was a sweet, lovely man.
Mark was preceded in death by his parents and by his youngest son, James. He is survived by his wife,
Susan Licher, St. George; brother, Bruce Licher, Batavia, IL; sister, Beth Dahlke (James), Coral Gables, FL;
brothers-in-law, Steven Peterson and Peter Jaret, Petaluma, CA; daughter, Amy Sanders Licher (Tracy),
Cedar Rapids, IA; son, Ben Licher, Tipton, IA; three grandsons, Samuel, Uriah and Grayson; and five
nieces and nephews.
Services will be held at a later date with friends and family in the Midwest.
Arrangements are made under the direction of Hughes Mortuary, 1037 East 700 South, St. George,
Utah, 435-674-5000. In memory, memorials may be given in his name to support the P.A.W.S.
animal rescue organization in St. George, UT.

To send flowers to the family in memory of Mark Whitney Licher, please visit our flower store.
Send a Sympathy Card