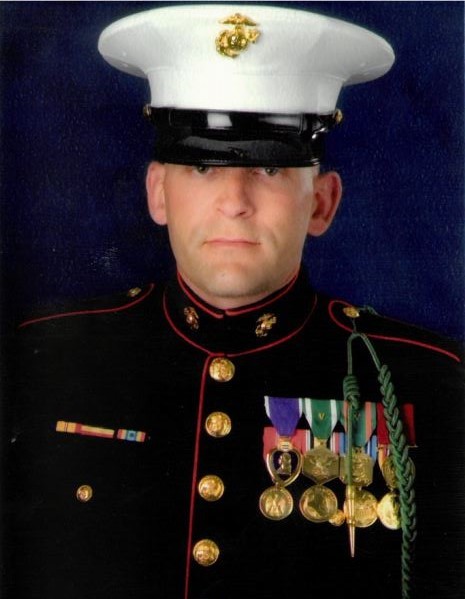 Michael Roper, 47, died November 29, 2020, in St. George, Utah, due to the unescapable effects  sustained while serving our country as a U.S. Marine.

Michael is the son of Marlan and Patty Roper and was born August 10, 1973, in St. George. He attended Utah Technical College where he earned various automotive certifications.

He proudly joined the U.S. Marine Corp. in 2002 and graduated Boot Camp from Camp Pendleton where he received the top marksman Leatherneck Award.

Michael served five deployments, all in Iraq. His combat brothers recognized him as a well-respected soldier and a man of character. He received the Navy and Marine Corps Medal with combat, Marine Corps Good Conduct Medal, Purple Heart, Navy and Marine Corps Commendation Medal with combat, Combat Action Ribbon, Sea Service Deportment Ribbon with two stars, Iraq Campaign Medal, Global War on Terrorism Service Medal and Global War on Terrorism Expeditionary Medal. His Purple Heart was awarded due to injuries received in Baghdad while in combat. He was honorably discharged in 2010 with the rank of staff sergeant.

One of his mom's favorite memories of Michael is when he asked her to teach him how to waltz so he could attend the Marine Officer's Ball.

Motorcycles, camping and the serenity of the Arizona strip were some of Michael's greatest loves.

He was always known for his big heart. He made others feel special while serving with compassion and love; he never judged anyone.

We grieve the loss of all potentially wonderful occasions, exciting experiences and quiet moments that we could have shared with Michael. Our lives will be less full with his absence, but we hope for the time when we will be together again. Michael, our handsome father, son, brother and uncle, we feel very blessed and our hearts are full of joy because in a small moment in the vastness of time, we were able to spend time with you. We will love you forever.

We would like to thank all who served with and loved Michael.

He is survived by his parents: Marlan and Patty Roper and two sons: Caden and Dax; two brothers: Gregory (Amy) and Nicholas (Caria); plus many nephews, aunts, uncles and cousins.

A memorial service with military honors will be held on Saturday , June 5, 2021at 11 a.m. at the Tonaquint Cemetery in St. George. Interment of his remains will be at the Arlington National Cemetery in Washington, D.C. in the fall.

To send flowers to the family in memory of Michael C Roper, please visit our flower store.
Send a Sympathy Card