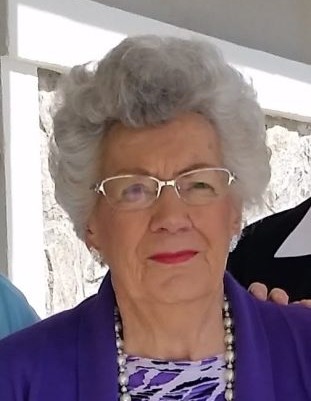 Nathella Bundy Wood, age 98, passed away peacefully, December 27, 2020 while in the care of her daughters.  She was born on November 7, 1922, in Mt. Trumbull, Arizona to James and Chloe Van Leuven Bundy.  She was the ninth of 14 children.  Life on the Arizona strip, as the daughter of a sheep/cattle rancher was primitive yet she always said, â€œI personally would not trade nor wish for a more happy childhoodâ€.  She learned to make homemade bread when she was still so young that she had to stand on a chair to reach the bread bowl on the kitchen counter.  By the age of twelve she was making 12 loaves at one time.  She had five older and three younger brothers; so, there was always a need of her help with laundry, food preparation, dishes and babysitting.  Her classmates were made up of siblings and cousins attending the one room schoolhouse (that also served as the church and multipurpose building for the community).  She attended that school through 8th grade and then moved away from home to attend high school in St. George, Utah.  She finished her senior year and graduated in Hurricane, Utah.  It wasnâ€™t long after graduation that she met and married Dell Wood, the man who became her husband of 67 years.  They were married in Boulder City, Nevada August 30, 1943.  They moved back to Hurricane just long enough to have two children before moving back to Boulder City in 1950, building a home and adding two more children to the family.  Nathella was instrumental in planning/preparing the Dime-a-Dip Dinners offered to the community at large, to earn funds to pay off the new and first permanent LDS Chapel in Boulder City.  Nathella held many callings in her church, including Scout Leader, Girls Camp Director and Young Womenâ€™s Leader.  She and Dell also performed with the Circle Eight Square Dance Club.  In 1971 the family built a cabin on Kolob Mountain in Southern, Utah and she enjoyed spending summers there.  To be in closer proximity to the cabin, they built a home and moved back to Hurricane in 1977.  There she rejoined a Pinocle card club she had started before she left in 1950, as well as joining another card club and the Buenaâ€™s Amigas Club for which she served as President on two occasions.  This civic organization raised funds for many worthwhile causes in the community. One of her favorite hobbies was making quilts, yet she crocheted and embroidered as well.  Playing board games, especially Rummikub brought her much entertainment.  She was still living independently, making bread and driving at age 95; when a health issue necessitated she have more fulltime care.

She remained gracious and kept her sense of humor until the end.  She is so loved and will be missed by her immediate family as well as a large, extended family.

Funeral services will be held January 4, at 12:30 in the Heritage Chapel, Church of Jesus of Latter-Day Saints at 1178 So. 700 West, Hurricane, Utah with a viewing 10:30 am to 12, prior to the funeral at the same location.  Burial at Hurricane Cemetery.

Link to photo album of Nathella :

Services will also be broadcast on YouTube at the link:

To send flowers to the family in memory of Nathella M Wood, please visit our flower store.
Send a Sympathy Card