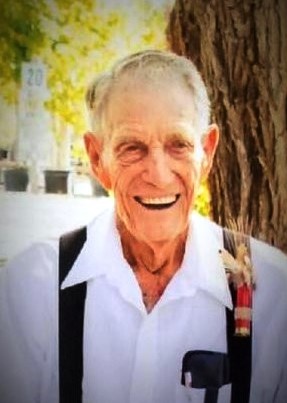 Ned C Ruesch passed away peacefully in his home August 27, 2016 at the age of 87.   He was born April 27, 1929 in Beaver, UT to Cadmas and Beatrice Erickson Ruesch.  He was a member of The Church of Jesus Christ of Latter-Day Saints.  He married Peggy Giles Dotson on September 14, 1946 in Beaver, UT. They have celebrated 70 years together. They were sealed March 28, 1959 in the St. George Temple.  He lived in Hurricane, UT, Milford, UT, Long Beach, CA and spent the majority of his life in "God's Country" Beaver, UT.

Dad loved spending time with his family and we could go to him anytime for advice and counsel.  He was full of life and had a great sense of humor with "one liner comments" that kept us all in stitches.

Ned enjoyed the mountains, hunting and visiting with friends & family.  He raised and loved his children and was strict with them in many ways.  He loved his wife and provided well for them all.

His whole life has been built around hard work. He has cut and hauled posts and Christmas trees and worked in the Beaver View Mine. He owned and managed a couple of Service Stations.  He started a Garbage Run twice and he worked for the Forest Service and LA Young Construction.  He helped to build Three Creeks Reservoir Dam and made many new roads throughout The Beaver Mountains.

In May 1969, he began Ned's Excavating, which later became known as Ruesch Excavating, when his son Randy took over the business.  One of the best and memorable highlights of Ned and Randy's work career, along with Fred Houston, was constructing the Cut Through at Flaming Gorge Reservoir at Horse Shoe Canyon.

He enjoyed many sports and activities that involved guns and he has won multiple awards throughout his life. He has passed his love of guns onto his Son and Grandsons.

"We Love You Forever!  We Will Miss You and Your Wonderful Smile" - "Until We Meet Again".

Graveside Services will be held Friday, September 2, 2016 at Beaver Mountain View Cemetery at 12 o' clock Noon with a Visitation prior from 9:30 - 10:45 AM at the Beaver 3rd Ward Church on Main Street.

Online Condolences may be shared at www.hughesmortuary.com.

To send flowers to the family in memory of Ned C. Ruesch, please visit our flower store.
Send a Sympathy Card