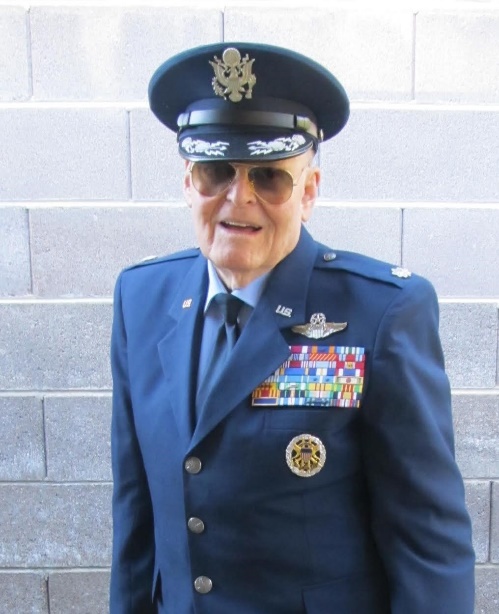 I was born July 15, 1930 in Ely, Nevada to Loraine Redd (LR) and Mildred Reid Ivins.  I had an older sister, Dr. Della Mae Ivins Rasmussen, and a younger sister, Nancy Ivins Shelton.  I lived a charmed life in the small towns of Lund and Overton, Nevada before moving with my family to Salt Lake City.

I attended Moapa Valley High School in southern Nevada, Granite High School and East High School in Salt Lake excelling in golf, tennis and basketball.  I was recruited to play basketball at BYU and the University of Utah, choosing to play at Utah.  In 1951, with the Korean War now going, I left school to join the US Air Force achieving my dream of becoming a pilot.  After pilot training, I flew F-86 Sabre jets as a fighter pilot in Korea.  During my Air Force career, I flew a number of America’s best fighter jets and served all over the world, including Korea, Philippines, Vietnam, Europe, Central America and much of the United States.

After Korea, I was assigned to the Philippines, where I met the love my life, Ana Maria Pertierra, “Nani”.  We married in the Philippines on September 17, 1955 and ultimately had four terrific children, Tony (Cyndi), Brooke Ivins Peterson (Mark), Michelle Ivins Oates (Bart), and John (Shaunae).  Nani and I were sealed to each other in the Provo Temple in 1975 and later to our children in 1977 after Nani and our children joined the Church of Jesus Christ of Latter-day Saints.  We were blessed with 15 grandchildren and 35 great grandchildren.  I am told that I was a far more lenient granddad than I ever was as a dad.  Hmmm, go figure!

While stationed in the Washington DC area, I completed my undergraduate degree at George Washington University (with much better grades than I earned at the U of U and while living at the Sigma Chi fraternity house).  I retired from the Air Force in 1973 as a Lt. Colonel after more than 22 years and began preparing for a new career.  I was accepted in the first class at the newly opened BYU J. Reuben Clark Law School and began my studies while my older children were in college and high school. A few of my classmates and I were much older than the other law students and we all had teenage children, so we were permitted to accelerate our studies by doing additional coursework during the summers at the University of Utah’s law school.  The four of us were technically the first graduates of BYU’s law school after completing our studies in only two years.

After law school, I partnered with William Burke and opened law offices in Provo City and Heber City, Utah.  While practicing privately for several years, I also served as the LDS Bishop of the Pleasant View 2nd Ward in Provo and as the Utah Freedom Festival Chairman.  I also gradually became involved in local politics and county Republican Party leadership.  This resulted in starting me on my third career with the US House of Representatives and the US Senate, becoming chief of staff for Utah Congressman Howard Nielsen in Washington DC and Legislative Counsel to Senator Jake Garn.  In 1992, I retired from my political career and became a partner in another law firm and moved to our new home in St. George, Utah.  Actually, I was playing tennis and golf far more than practicing law until a series of ailments challenged my physical abilities.  So, I contented myself with using my mind by insatiably reading books (2-3 per week), newspapers (3-4 per day), watching Fox News (all day, every day) and visiting with family and my many dear friends.

I was preceded in death by my parents and both of my sisters as well as my dear granddaughter Jenna Shae Ivins.  I am survived by my wife of 64 years, Nani, my children and their spouses, 14 grandchildren and 35 great grandchildren and a host of extended family and cherished friendships.

My life has been a series of grand adventures, some great and some not so great, but adventures just the same.  I have lived, loved and savored experiences that few will equal and I am grateful for every one of them, good and bad, because they all helped shape me.  I am grateful to my Savior and His sacrifice which means that I will have the opportunity to spend eternity with those that I cherished the most in this life.  I am thankful for those who have helped in my later years when my physical abilities declined.  They helped keep me engaged in the lives of friends and family.  More recently, I am grateful to the nurses and staff at the Veterans Home in Ivins, Utah who cared for me generously over the past year.

God has truly blessed me and I hope that you are similarly blessed.  And now . . . it’s up, up and away to the next life and to see what eternity has in store for me.

Funeral services will be Saturday, December 21, 2019 at 12:00 noon at the Green Valley Stake Center, 511 South Valley View Drive.  A viewing will be held at 10:00am prior to the service.  Interment will take place at the Tonaquint Cemetery, 1777 South Dixie Drive in St. George at 1:30pm.

To send flowers to the family in memory of Reid Ivins, please visit our flower store.
Send a Sympathy Card