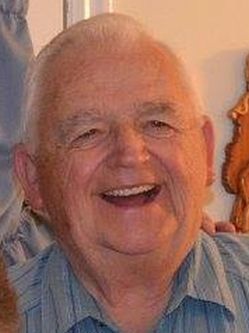 Rex Stanley Bivens passed away peacefully at his home in Santa Clara, Utah on February 22, 2018. He was born May 26, 1935 to Rex Harrison and Dorothy Rittenhouse Bivens in Browning, Illinois. He married Willene Crounk on July 14 1956 in Pueblo Colorado. They were later sealed in the Los Angeles Temple. Together they raised four children in southern California. Rex was the proud grandfather of 11 grandchildren and 24 great-grandchildren.

He served in the United States Marine Corps from 1953- 1956 entering boot camp toward the end of the Korean War. He was an owner, manager and sales person with Harley Davidson for many years.

Rex held many callings in the LDS church.  In recent years he served as the executive secretary along with two Bishops and most recently as the greeter in his ward where his unerring kindness, joviality, and genuine spirit were experienced by many. Those same traits garnered Rex many friends throughout the years. Always the helpful and handy fellow, Rex often came to the assistance of his family, friends, and neighbors when something needed repaired.

He is survived by his wife Willene, a brother Terry Bivens, sister Ruth Gosney, four children - Steven (Sherry) Bivens, Gregory Bivens, Cindy (Lance) Stewart, Kenneth “Kip” (Ken) Bivens, 11 grandchildren and their spouses, 22 Grandchildren. He was preceded in death by his parents and a sister Peggy.

Arrangements are made under the direction of Hughes Mortuary, 1037 East 700 S. St. George, Utah, www.hughesmortuary.com  (435) 674-500.  In lieu of flowers, Paypal donations may be made to sgbivens@wavecable.com or mailed to Willene Bivens, 2281 Arrowhead Circle, Santa Clara UT 84765.

To send flowers to the family in memory of Rex Stanley Bivens, please visit our flower store.
Send a Sympathy Card