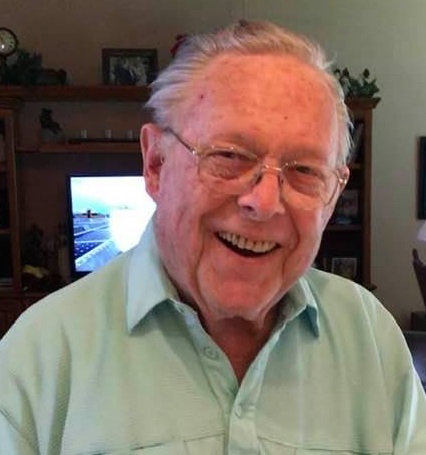 How do you begin to tell the life story of “SUPERMAN” ? That is who Richard Alan Wilken was and even claimed to be throughout his whole life to those who loved him so much! When his children (and grandchildren and even great-grandchildren )were young, he would tell them that he was (in fact) the REAL Superman. Often, he would give a “quick” glance to his superman shirt under his shirt. BUT…we had to look fast or we would miss it! He would also give us a little demo of how he would FLY in a flash. But he made us ALL promise that we would never tell anyone his TRUE identity.  But of course, we ALL told our friends that WE knew and were even related to the REAL Superman.

This wonderful human, was small in stature—okay—let’s be honest—he was SHORT! But, he was a GIANT in our eyes and hearts! Oh how we love him and OH how we will miss him! None of us or his friends could pass up on an opportunity to tell a  “short” joke in his behalf. Even though he would tease us all about telling them…he loved ALL of them!  …Which brings to mind something that anyone who knew him LOVED his contagious laugh. (You can hear him right now, can’t you?) NO one…and we mean NO ONE could out-laugh our dad, lovingly known to all who knew him as Dick.

Dick was born on March 29, 1934 in Peoria, Ill. and was the only son of Bernard Wilken and Garnette Lenore McCorkle. He had one sister, Janet Lenore. He grew up in the Peoria and the Chicago area most of his young life.

Dick’s love in life was sports, but in particular he LOVED baseball! He played on several teams in grade school, junior high and high school and was always sought after for his great skill—especially with his pitching gift. He later taught MANY young men AND women the art of pitching…

While in high school he met and married Glenda Sue Coleman. This union brought 4 beautiful daughters, Debra Lynn, Cynthia Susan, Barbara Ann, and Joanne. (We often wondered why poor Joanne did not get a middle name J ) Dick and Glenda later divorced.

Dick was a member of the Church of Jesus Christ of Latter-Day-Saints. One of his favorite callings was teaching the youth in Sunday School.  He LOVED the youth of the church! He received many letters from young men thanking him for “teaching” them.

In 1970, Dick was introduced to a cute blonde-haired girl by the name of Penny. They both worked at Litton Industries. They had a lot in common but mostly, that they had both been divorced and both had 4 children. They dated, fell in love, and it has never been anything but love for Dick and Penny! On July 10, 1971 Dick and Penny were married.  Their marriage was later solemnized in the Los Angeles Temple. Family was something that was always very important to both of them. There were NO step-kids---just kids- and ONE family. AND more importantly, we were ALL the favorite!

Penny and Dick spent most of their married life in Simi Valley, California until they moved to St. George, UT. in1995.  Dick didn’t play baseball/softball as much when they moved due to bad knees. So—he sacrificed and added the sport of golf. He became quite good too and loved to “teach” ALL of his sons and grandsons the perfect way to hold a club. To top it off—he was able to succeed in obtaining a hole in one, three different times!

Penny spoiled Dick rotten.. she took the absolute best care of him until she passed away due to cancer in 2013. She has been missed by all of us!

Richard Alan Wilken “Dick” passed away on May 3, 2021at the age of 87. He was preceded in death by his beloved “Penny”  and  5 grandchildren

To send flowers to the family in memory of Richard Alan Wilken, please visit our flower store.
Send a Sympathy Card